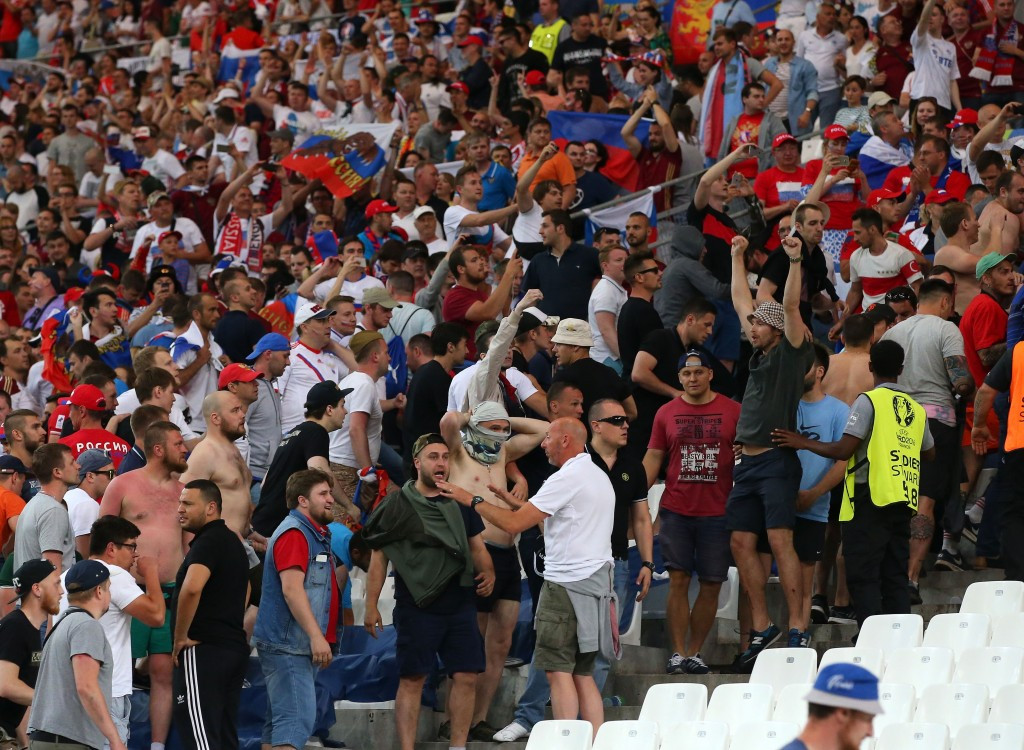 Russia have been handed a suspended disqualification from the 2016 European Championships in France by UEFA with the country now facing the prospect of being thrown out of the tournament should further crowd trouble occur at their matches.

The sanctions were imposed by European football’s governing body after violent scenes marred Russia’s opening Group B match with England in Marseille, with the tie ending in a 1-1 draw.

Marseille prosecutor Brice Robin yesterday claimed that a group of Russian hooligans were behind the violence which plagued the city before and after the match, but admitted they had avoided detection.

The Russian Football Union were charged following the violent clashes within the Stade Vélodrome, with England facing no action.

However both country’s Football Associations were warned that further violence could see their national teams expelled from the tournament.

After charging the Russian Football Union, who are led by Vitaly Mutko, with crowd disturbances, use of fireworks and racist behaviour, UEFA have handed them a €150,000 (£119,000/$168,000) fine and the suspended disqualification.

The potential disqualification is suspended until the end of the tournament, but the national team could be expelled should crowd trouble happen “inside the stadium” at their remaining matches.

“The punishment is excessive, but we cannot influence it,” Mutko told R-Sport.

“The fine is massive, we [Russian Football Union] are a public organisation, after all.

“But what does the team have to do with it, it's not their fault.”

Kremlin spokesman Dmitry Peskov, however, has condemned the the behaviour of supporters in Marseille and called upon Russian fans to avoid responding to “provocations”.

"In general, we can say that unlawful actions took place on the part of fans, I'm talking here about fans from different countries, who participated in actual outrage in Marseille and in several other towns,” he told Sputnik news.

“Of course, this is absolutely unacceptable, of course, we hope that Russian citizens, Russian fans will respect the laws of the country they visit.

“And the main thing is, of course, you can only call on our fans not to respond to any provocations.

England manager Roy Hodgson and captain Wayne Rooney also appealed for fans to behave ahead of their match against Wales in Lens on Thursday (June 16).

Both the Croatian and Turkish Football Associations have, meanwhile, been charged after their fans set off fireworks at their Group D match at the Parc des Princes in Paris yesterday.

Croatia have also been charged for pitch invasions and Turkey are facing action for the throwing of objects.

Albania face action over the setting off and throwing of fireworks at their Group A match against Switzerland, along with an illicit banner, at the Stade Bollaert-Delelis in Lens.

Six English supporters have been jailed regarding the three-days of violent clashes in Marseille, with the highest sentence being three months, while three French and one Austrian, are due in court.

According to Russian news agency TASS, French authorities have confirmed that they had detained a bus of Russian fans following the disturbances, with searches of their hotel rooms having reportedly been carried out.

Alexandr Shprygin, head of the Russian Union of Supporters, has claimed that the 29 Russians were to be deported from France ahead of their tie against Slovakia tomorrow in Lille.

In the build-up to the match, Russia’s team doctor Eduard Bezuglov has questioned whether the country are being treated the same as others at the tournament regarding anti-doping.

It follows doping scandals in the country, concerning athletics and the Sochi 2014 Winter Olympic Games, while Mutko was last week accused of covering up the failed doping test of a Russian footballer in a documentary by German broadcasters ARD/WDR.

"We have been asking this question to ourselves, "whether we have been tested more than others," Bezuglov told the Associated Press.

“All national teams are under the control of UEFA and FIFA, and before the group stages of the competition the Russian national team were already visited more than three times by doping control inspectors.

“And I am saying this is because the Russian national football team has never had any precedents of this kind, we have never had a single problem like that.

Bezuglov claimed that so far 44 anti-doping tests had been carried out on the team’s players at the European Championships in France.