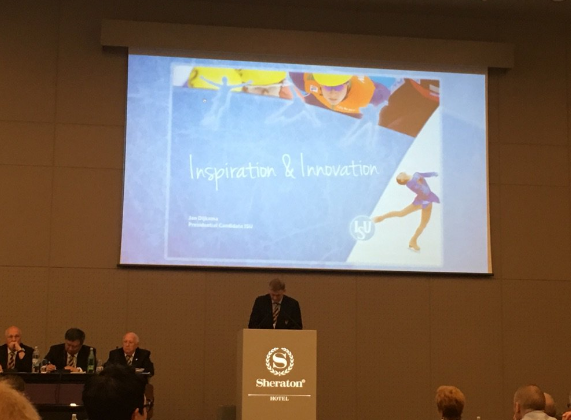 The Netherlands' Jan Dijkema has been elected the first new President of the International Skating Union (ISU) in 22 years to replace Ottavio Cinquanta at today's Congress here.

The 71-year-old won by 63 votes over 52 for Hungary György Sallak in a second-round run-off after France's Didier Gailhaguet and Britain's Chris Buchanan each withdrew.

Dijkema, who had previously been ISU vice-president for speed skating, will continue a tradition of a speed skating representative leading the organisation that has already stretched 36 years.

"I am satisfied that the result was good and I am elected," the septuagenarian told insidethegames afterwards.

"It's not an easy process in the international field, with many countries voting like a block.

"But I had a lot of help from the figure skating field and that is why I was elected.

The official won the first round of voting with 45 votes to Sallak's 43, with Gailhaguet receiving 25 and Buchanan just two.

Gailhaguet and Buchanan then announced their withdrawal ahead of a second-round, with enough of the Frenchman's European support switching to the Dutchman.

The result will come as a relief to much of the wider skating community due to concerns over the suitability of both Sallak, who is accused of misusing ISU funds during his time as development coordinator, and Gailhaguet, who returned from a three-year ban from the sport for involvement in the Salt Lake City 2002 judging scandal.

Gailhaguet's defeat also marks a blow for Vero Communications, who had spearheaded his campaign despite not being here to support him this week.

The British consultancy firm, who are also supporting the Paris 2024 Olympic bid, were looking to continue a streak which had seen them successfully help Brian Cookson, Sebastian Coe and Gianni Infantino become respective Presidents of the International Cycling Union, International Association of Athletics Federations and football body FIFA in recent years.

Dijkema was seen as a steady-hand rather than a spectacular choice, and has vowed to focus on the period up to the Pyeongchang 2018 Winter Olympics before calling fresh elections in two years time.

He delivered a statesman-like five minute address in the closed Congress, insidethegames was told, during which he highlighted how the ISU was founded in Scheveningen in The Netherlands in 1892.

Marketing and promoting the sport, development and good governance were hailed as his three main priorities.

"The President is important, but you can't do it alone," he added afterwards.

"I have to work in a team with the new Council.

"I hope we will have a smooth transition and will now start a new era in the ISU, as spelled out in my manifesto."

He also reiterated how, "in principal", he plans to stand for just a two year term, which would end in 2018 shortly before his 74th birthday.

But he left the door open, adding "we will see how it goes".

Sallak, clearly disappointed, was not available to speak to afterwards.

Also chosen were South Korea's Kim Jae-Youl, with 97, Stoycho Stoytchev of Bulgaria, with 93, Maillard with 76 and Sergio Anesi of Italy, with 72.

Lundmark retained her place on the Council with 91, with Benoit Lavoie of Canada and Maria Teresa Samaranch of Spain - daughter of former IOC President Juan Antonio - joining her with 85 and 67 respectively.

Dijkema's winning manifesto can be read in full here.