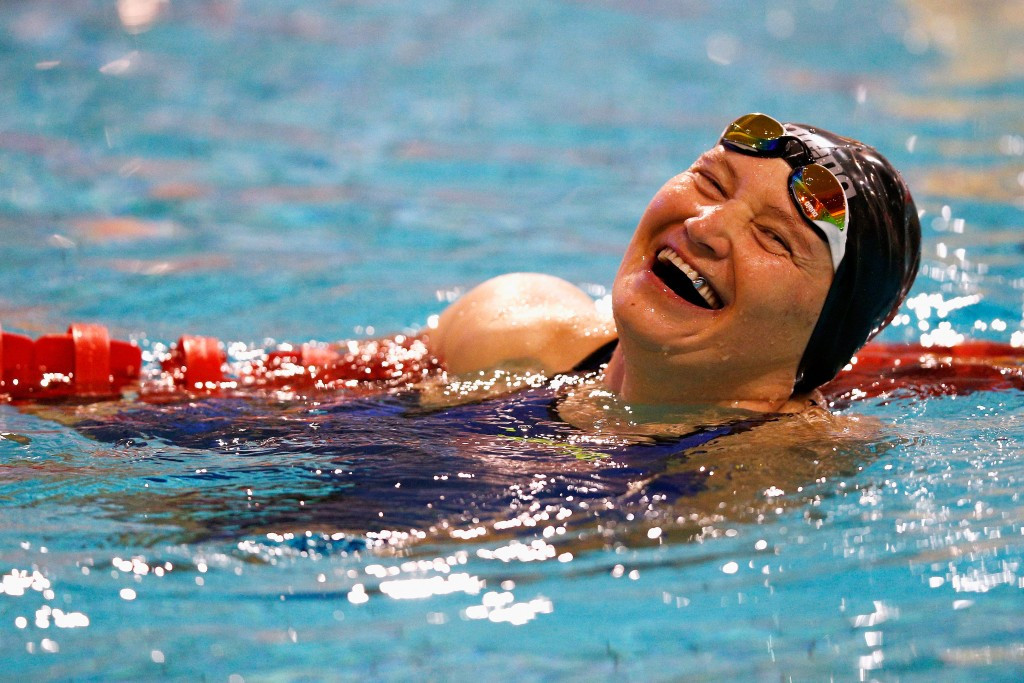 Gabidullina stormed to victory in 43.22sec, finishing ahead of Ukraine’s Olga Sviderska who took the European gold medal in 46.64.

In the women’s 100m backstroke S9, world and European bronze medallist Nuria Marques Soto of Spain claimed the title in 1:09.51.

The time meant she took a six-year-old European record from Great Britain’s Stephanie Millward, who was second in 1:12.68 ahead of Hungary’s Zsofia Konkoly in 1:15.88.

The European champion came from behind to finish 0.80 seconds ahead of Poland’s Patryk Biskup with a time of 1:04.18, while Hungary’s Tamas Toth was third in 1:05.85.

Britain’s Oliver Hynd was just under half a second away from the world record on his way to winning gold in the men’s 400m freestyle S8 with a time of 4:24.77.

In doing so, he also claimed the European title of Czech Republic’s Arnost Petracek, who settled for silver in 45.66 ahead of his team-mate Jan Povysil in 47.40.

Stukalova was just 0.10 seconds away from equalling the world record, while Germany’s Naomi Schnittger was third in 28.44.

Poland won their first gold courtesy of Wojciech Makowski with a time of 1:09.01 in the men’s 100m backstroke S11.

Makowski overtook Ukrainian world champion Dmytro Zalevskyy on the turn, leaving him with silver in 1:09.96 ahead of team-mate Viktor Smyrnov in 1:10.28.

Another swimmer to reach the top of the podium for their country for the first time was European champion Amalie Vinther of Denmark with a time of 5:17.01 in the women’s 400m freestyle S8.

Norwegian world and European champion Sarah Louise Rung retained her title in the women’s 200m individual medley SM6 with a time of 3:18.11.

Her second gold of the Championships came at the expense of world silver medallist Inbal Pezaro of Israel and Spain’s Teresa Perales, who completed the podium in 3:39.27 and 3:41.53 respectively.

Belarusian world and European champion Ihar Boki also won his second gold of the week with a time of 23.61 in the men’s 50m freestyle S13.

Ukraine’s Oleksii Fedyna and Iaroslav Denysenko tied to both take silver in 24.34.

World, European and Paralympic champion Maksym Veraksa of Ukraine had the edge again in the men’s 50m freestyle S12 with a time of 23.80.

Azerbaijani brothers Dzmitry Salei and Raman Salei were second and third in 24.14 and 24.45 respectively.

Completing their list of victors was Yevheniy Bohodayko in the men’s 50m butterfly S7, Maryna Piddubna in the women’s 100m backstroke S11, and the quartet of Iaroslav Semenenko, Viktoriia Savtsova, Oksana Khrul and Vynohradets in the 4x50m medley relay.

Brazil’s Paralympic champion Andre Brasil had to overcome his team-mate Phelipe Rodrigues in the last quarter of the men’s 100m freestyle S10.

Rodrigues was first on the turn, but Brasil kicked hard to touch the wall first in 52.17 to take Open gold.

Rodrigues got Open silver in 52.34 with Russia’s world and European champion Dmitry Grigoryev retaining his European gold in 54.30.

Another Russian, Dmitry Bartasinskii, clocked 54.42 to finish ahead of Ukraine’s Denis Dubrov, who claimed European bronze in 54.56.