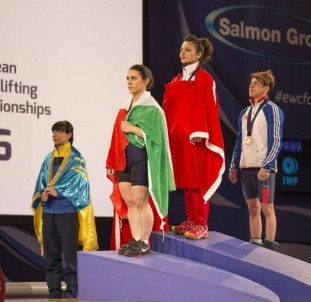 Turkey and Italy took the honours on day one of the European Weightlifting Championships at here today.

Sibel Ozkan, of Turkey, retained her title in the women’s lightest category, 48 kilograms.

The minimum weight for men, 56kg, was won by Mirco Scarantino, making it a good day for Italy, who also took the silver medal in the women’s event.

It was a day for young and old competitors.

The Czech Republic fielded two 14-year-olds in the men’s 56kg B Group, Tomas Mirga and Frantisek Polak, both of whom took up the sport two years ago.

“I was very happy with their performance – we need boys like this for the future,” said the Czech Federation President Petr Krol after they had finished 12th and 13th respectively.

In the women’s final the Albanian Shqiponje “Eagle” Brahja, banned for two years for testing positive at the 2011 World Championships, finished eighth at the age of 42.

Belgium’s Tom Goegebuer, 41, was close to winning a medal in the 56kg, finishing fourth in the snatch.

Brahja is the oldest female competing in Førde but not oldest overall: Hungary’s Noel Nagy, 45, is due to compete in the men’s 77kg C Group on Tuesday (April 12).

Ozkan did not need to take her sixth and final lift when Genny Pagliaro, of Italy, failed with her last attempt in the clean and jerk.

As a girl, Ozkan played judo from the age of nine.

Soon after trying weightlifting for the first time, aged 12, she switched.

“My coach told me I was so strong I should stay with it,” she said.

She was inspired by the two great heroes of Turkish weightlifting, multiple Olympic and world champions Nayim Süleymanoğlu and Halil Mutlu.

In the clean and jerk the finishing order was Ozkan, Pagliaro and Iana Diachenko, of Ukraine.

Scarantino weighed in lighter than Spain’s Josue Brachi Garcia, and beat him on body weight after both men finished on 264kg – 17kg clear of third-placed Ilie-Constantin Ciotoiu of Romania.

It was a tight contest all the way through.

The Spaniard beat Scarantino by one kilogram in the snatch, in which Turkey’s Ismet Algul was third.

In the clean and jerk Scarantino was a kilogram  better than Brachi Garcia, and the bronze went to the Azerbaijani Elmar Aliyev.