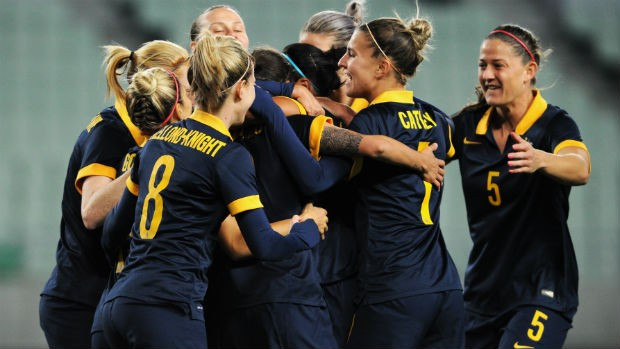 Kyah Simon broke the deadlock inside the first 60 seconds at the Nagai Stadium, carrying on where she left off after her hat-trick against Vietnam on Wednesday (March 2).

Emily van Egmond then marked her 50th appearance by converting a penalty in the 14th minute after Lisa De Vanna was brought down in the box.

The inspirational De Vanna was the main instigator in Simon’s goal with her run and eventual shot coming off the post to give her team-mate the opportunity on the follow up.

The win takes the Matildas to a maximum nine points after three games with two match days of the tournament remaining.

"I thought it was a really tough game and it could have gone either way.

"Korea Republic gave us a very good run and they certainly dominated large parts of the game and were maybe unlucky at times but we looked good on the counter attack and we were dangerous when we could get forward and in behind.

"But full credit to Korea Republic because I thought they were a really good opponent tonight."

Two points behind Australia in second place are China, who defeated hosts Japan 2-1 at the Kincho Stadium.

Zhang Rui set Bruno Bini’s side on their way in the 14th minute and Gu Yasha put them two ahead in the 58th.

Kumi Yokoyama pulled one back for Japan in the 64th minute but it was to no avail.

A further two points back in third spot are North Korea after they left it late to snatch a 1-0 win over Vietnam.

The teams who finish in the top two places in the group will secure a Rio 2016 berth.

The tournament in Osaka is due to continue on Monday (March 7) when China entertain South Korea, North Korea meet Australia and Vietnam face Japan.

A total of nine countries have already qualified for the tournament, led by the hosts Brazil and the United States, winners of the Olympic gold medal in the last three Games and last year's World Cup winners.

Action is set to resume at the European Women's Qualifier in The Netherlands tomorrow as the hosts go up against Norway and Sweden do battle with Switzerland.