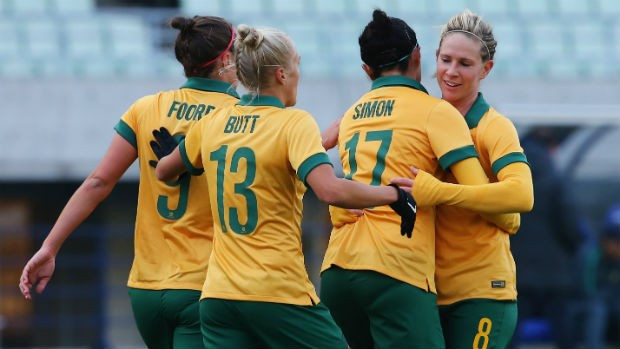 The Australian side were in ruthless form throughout and they led 5-0 at the interval, Emily Gielnik and Alanna Kennedy adding to Simon’s treble.

The Matildas then inflicted further misery on their hapless Vietnamese opponents as Ashleigh Sykes, Emily van Egmond and Michelle Heyman added their names to the scoresheet before Clare Polkinghorne completed the rout late on in a match watched by just 129 spectators.

Australia’s comprehensive win cemented their spot at the top of the six-team round-robin group and maintains their pursuit of a first appearance at an Olympic Games since Athens 2004, when they reached the quarter-finals.

They failed to qualify for Beijing 2008 and London 2012 but got to the last eight state at last year’s FIFA Women's World Cup in Canada under current coach Alen Stajcic.

The teams who finish in the top two places in the group will secure a Rio 2016 berth and Australia already look well-placed after Japan’s clash with South Korea and North Korea’s encounter against China both ended 1-1.

Australia, who gave a debut to 15-year-old Ellie Carpenter against Vietnam, have a two-point advantage over China.

They had been able to claim only a 2-0 win in their opening match with Vietnam on Monday (February 29).

“Six points isn’t enough to get us to Rio, there is still a lot of football to be played,” Stajcic.

“We’re two good steps down the track but there is still a long way to go and we know we’ve got three tough games ahead.

“We’ve made good strides forward but there is a long way to go and we’re not taking anything for granted.”

The wait for a victory at the AFC Women’s Olympic Qualifying Tournament goes on for the host country after the 2015 World Cup runners-up were held to a frustrating draw by South Korea at the nearby Kincho Stadium in Osaka.

With the tense contest locked at 0-0, Ji So-yun wasted a glorious opportunity to give the Koreans the lead as she missed a penalty after 70 minutes.

Japan looked as though they had snatched all three points before an attendance of 5,605 when substitute Mana Iwabuchi’s header gave the home side the lead with just six minutes to go.

South Korea hit back, though, through Jung Sul-bin, who capitalised on an error from Japan goalkeeper Miho Fukumoto three minutes later to ensure the match finished all-square.

China were also involved in a dramatic encounter in the second match at Nagai Stadium.

A 92nd minute penalty from Wang Shuang saw them rescue a draw from their clash with North Korea, who had gone in front towards the end of the first half thanks to Ra Un-sim’s strike.

The tournament in Osaka is due to continue on Friday (March 4) when Vietnam entertain North Korea, Australia meet South Korea and the hosts face China.

A total of nine countries have already qualified for the tournament, led by the hosts Brazil and the United States, winners of the Olympic gold medal in the last three Games and last year's World Cup winners.

Action has also begun at the European Women's Qualifier in The Netherlands.

A goal from Lisa Dahlkvist gave Sweden a 1-0 win over Norway in the opening match before the Dutch hosts won a thrilling contest, 4-3 over Switzerland.