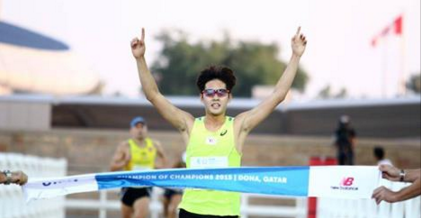 The world number nine was pushed right to the wire in Qatar’s capital and only confirmed his victory at the last shooting range of the combined event as he fought off the challenge of Lithuania’s Justinas Kinderis, who claimed silver, and fellow South Korean Jinhwa Jung, the bronze medallist.

Jun had already enjoyed a significant breakthrough this year, finishing second at the Asia/Oceania regional Olympic qualifying event in Beijing and then, after an impressive UIPM World Cup series, came seventh in the final in Minsk.

Jun and compatriot Jung signalled their intent from the outset today with the latter completing the 200 metre swim in the fastest time of 2min 00.72sec, and the former only a fraction of a second slower in 2:01.13 ahead of Egypt’s Omar El Geziry in third.

Kinderis put a disappointing swim behind him by performing superbly in the fencing as he ended the ranking round with a record of 24-10 and then beat the second-ranked fencer, Riccardo De Luca of Italy, in the final bout of the bonus round.

Jun protected his overall lead by finishing third in the fencing, but things didn’t quite go to plan for the 20-year-old in the riding event as he picked up 28 penalty points to finish in 13th place.

Kinderis, Jun and De Luca all enjoyed perfect riding rounds along with Australia’s Max Esposito and Mexico’s Ismael Hernandez Uscanga, but it was El Geziry who ended the stage in the overall lead and consequently started the combined event with a five-second advantage over the rest of the field.

With so many athletes setting off with minimal handicaps - Kinderis, Jun, Jung and De Luca all started within 20 seconds of the leader - it was never going to be easy for El Geziry to protect his lead.

The combined event featured excellent performances from Hernandez Uscanga and fellow Mexican Jorge Inzunza, both of whom made brave attempts to reach the podium but ultimately fell short of the standard set by the front three.

In the end, El Geziry was forced to settle for fifth place after being overtaken by Inzunza, Jung, Kinderis and the winner Jun.

"Today my fencing and swimming were very good points, but my riding was a little bit bad - but then my combined was very good so I am very happy," said Jun, who won silver at the 2015 Junior World Championships in August.

"I am very young, and I am looking forward to the Olympic Games.

"My hope for next season is to train hard and make sure that my riding can be as good as my fencing and swimming."

Doha has a contract to stage the 2016 and 2017 editions of the Champion of Champions event.