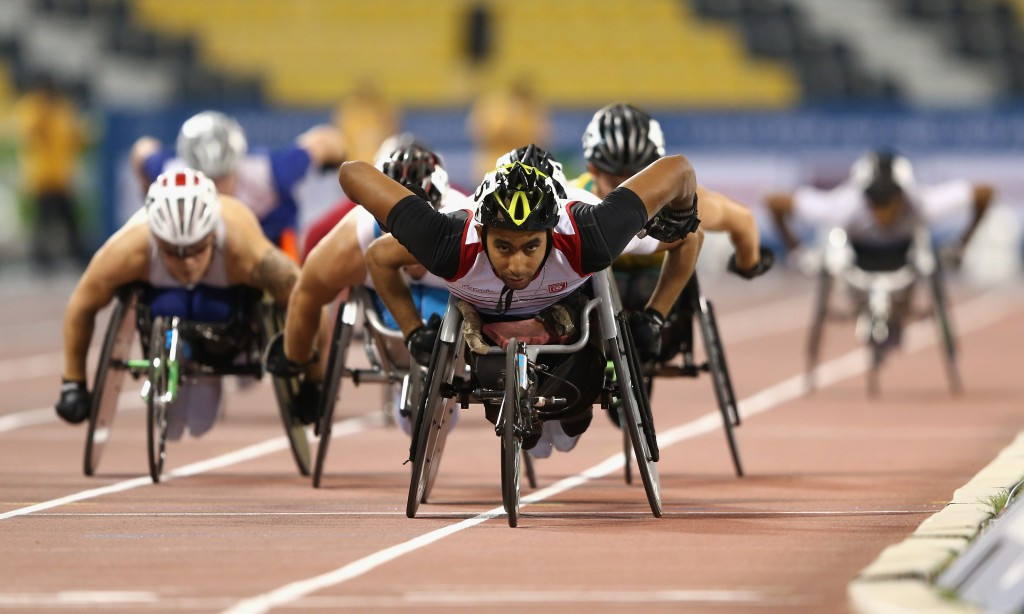 Tunisia’s Walid Ktila secured the title of the most successful athlete at the 2015 International Paralympic Committee (IPC) Athletics World Championships in Doha, clinching a fourth gold medal with victory in the men’s 200 metres T34 on the final day of competition.

Ktila rounded off a superb campaign in Qatar’s capital with a Championship record of 27.44sec to finish clear of the United Arab Emirates’ Mohamed Hammadi and Finland’s Henry Manni, second and third respectively.

"Every new race is always an exciting new experience, I never get bored of competing," said Ktila.

"When I came here I was looking for four gold medals and I have succeeded in this.

"I am excited to hear the national anthem of Tunisia again."

Ktila’s victory was one of 18 gold medals decided on the last day, as the number of world records set at the Championships rose to 54.

Russia’s Evgenii Shvetcov broke his own world record as he stormed to gold in the men’s 200m T36, ensuring his second title in Doha having already won the 400m.

Shvetcov’s time of 24.29 knocked 0.16 off the mark he set four months ago and saw him finish ahead of Ukraine’s Roman Pavlyk, who took silver, and compatriot Evgenii Torsunov in third place.

Andrey Vdovin added another gold medal to Russia’s collection by winning the men’s 100m T37 in a time of 11.46, taking 0.02 off his previous world record.

South Africa’s Fanie van der Merwe was unable to prevent Vdovin from claiming a third title, despite posting a season’s best 11.55 to finish runner-up ahead of Russia’s Chermen Kobesov.

There was also a world record for Russia in the men’s 4x100m T11-13 as the quartet of Fedor Trikolich, Aleksei Labzin, Artem Loginov and Andrey Koptev raced home in 42.11 to win gold ahead of Uzbekistan, who took silver with a national record of 43.71, and Spain in third spot.

China came out on top though in the men’s 4x400m T53/54 as the world record holders dominated the race from beginning to end, breaking the Championship record they set in New Zealand four years ago, finishing ahead of Thailand and France in 3:08.32.

Among the other track gold medallists on the final day of action was Britain’s Hannah Cockroft, winning a third gold medal with a Championship record of 1min 02.66sec in the women’s 400m T34.

There was a one-two for Japan in the men’s 400m T52 as Tomoki Sato finished well clear of compatriot Hirokazu Ueyonabaru with a time of 1:00.91.

Belgium’s Marieke Vervoort was equally comfortable in the women’s 400m T52, completing a hat-trick of golds in Doha with a time of 1:08.40.

Italy secured their first gold out in the field as Assunta Legnante topped the shot put F12 podium.

The defending champion led with her first throw of 12.92 metres, but her last effort of 14.02m saw her seal the win ahead of Russia’s Sofia Oksem, who threw a F12 world record of 13.60m to take silver.

Britain’s Hollie Arnold saw off strong competition in the javelin F46, retaining her title with a Championship record throw of 40.53m.

A Championship record throw of 11.81m in the opening round of the shot put F55 was enough for Bulgaria’s Ruzhdi Ruzhdi to take gold.

Iran’s Saman Pakbaz registered 46.20m to take victory in the men’s discus F12, while a huge fourth round throw of 41.93m by China’s Yanzhang Wang in the discus F34 meant a second gold medal for the 24-year-old, having won the javelin F34 title two days previously.

China topped the final medal table in Doha with a total of 41 golds, 26 silvers and 18 bronzes.

Russia, who headed the standings two years ago, finished runners-up with 24 golds, 21 silvers and 24 bronzes, while the US were third with 13 golds, 16 silvers and 10 bronzes.