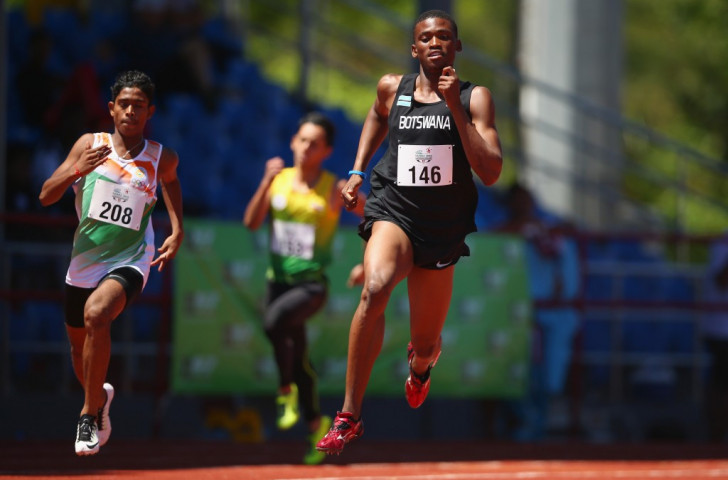 Sibanda, fifth in the event at the International Association of Athletics Federations (IAAF) World Youth Championships in Cali in July, ran 45.83sec to secure gold in front of Jamal Walton of the Cayman Islands, while Chandan Bauri of India sealed bronze.

India were able to top the podium in the boy’s javelin thanks to an impressive showing from Mohd Hadeesh, whose throw of 79.29 metres prompted gasps and cheers from the crowd inside the stadium.

Hadeesh’s attempt was the fifth-furthest registered in the event this year and saw him finish comfortably ahead of England’s Georgie Davies and Luke Giacca of Australia.

Another athlete who put on a superb showing for those who had come down to the picturesque venue again bathed in sunshine throughout the day’s action was South African Renate van Tonder, who won gold with a leap of 6.26 metres in the girl’s long jump.

Australian Billie Arch took silver with a best jump of 6.04m, with Rachel Alexander securing another medal for Scotland by finishing third.

Niamh Emerson maintained England’s decent showing in track and field so far in Samoa as her best effort of 1.80m in the girl’s high jump was enough for gold, with compatriot Ada’Ora Chigbo taking silver and Paige Wilson of Australia bronze.

Australia bagged their second athletics gold of the event with a one-two in the girl’s discus as Kristina Moore led the way with 46.95m, 75 centimetres further than nearest challenger and compatriot Bianca Hansen, with England’s Sophie Merritt clinching bronze.

The Nigerian sprinters, who looked in good form yesterday, swept the boy’s and girl’s 4x200m relay events, which were again held simultaneously due to a lack of entries.

Ojeikere Precious Omokheoa, Adeyimi Sikiru, Itsekiri Usheoritse Ese and Idjesa Uruemu replicated the feat of their girl’s team as they won the boy’s event in 1:28.35, with the home nation again taking silver.

Kenyan duo Willy Kiplimo Tarbei and Bett Kipyegon, winners of the  gold and silver medals respectively at the IAAF World Youth Championships, are both safely through to the boy’s 800m final after comfortably qualifying as the top two athletes in the heats.