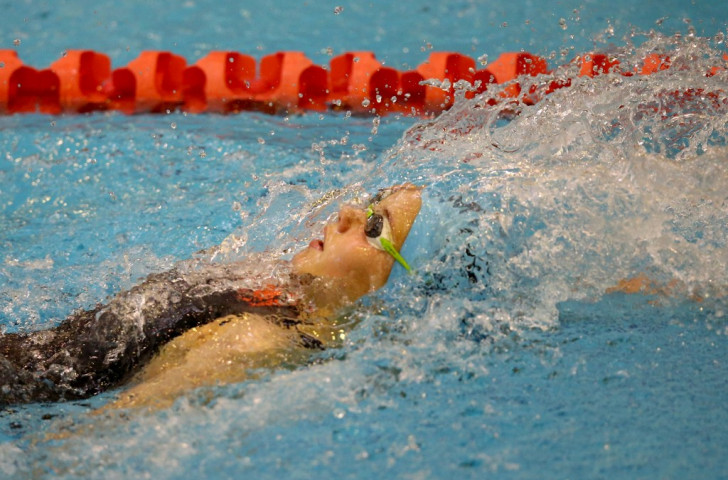 Gichard was third in the event in Singapore, where Australia’s Minna Atherton set a world junior record, but was able to produce a commanding display to pip her team-mate to the title thanks to a time of 1min 0.51sec, with Nathania Van Niekerk of South Africa sealing bronze.

Welson Sim Wee Sheng of Malaysia touched the wall in second place to claim silver and England’s Kyle Chisholm rounded off the podium by taking bronze.

Lewis was, however, unable to add to his tally on the night as he was second to Connor Ferguson in the boy’s 100m backstroke as the Northern Irish swimmer led for the majority of the race before finishing in 55.87.

Gemma Cooney, who was part of the Australian 4x100m and 4x200m relay teams who both broke the world junior record in Singapore in August, was also in good form as she claimed gold in the girl’s 200m in 2:13.51.

It proved to be a successful evening for South Africa as they reigned supreme in both the boy’s and girl’s 50m butterfly races.

Zane Waddell began the evening in style for his nation as he clocked 24.52 to seal gold in the boy’s race, with Brayden McCarthy of Australia and England’s Lewis Clough clinching second and third respectively.

Erin Gallagher, who competed for South Africa at last year’s Commonwealth Games in Glasgow, then won the girl’s event in 27.20 as she finished ahead of Australian duo Lucia Lassman and Cooney.

England were able to secure gold in the girl’s 200m freestyle as Georgina Boyle powered to victory in 2:00.72, just shy of a second in front of Kathryn Gleenslade of Wales.

Australian Shayna Jack, bronze medallist at the recent World Junior Championships, had to settle for third.

Tom Derbyshire of England won the boy's 1500m in 15:31.18 ahead of Welson Wee Sheng Shim and Tristan Ludlow of Australia.

Elsewhere, Wales, Fiji and India claimed a gold medal each on the first day of weightlifting action at Samoa 2015.

Catrin Jones produced an excellent display to get Wales of to a great start as she topped the podium in the girl’s 48 kilograms category with a total of 126kg, just 1kg more than silver medallist Srimali Divisekara Mudiyanselage of Sri Lanka, while Hailee Jarrett was third.

Ulina Sagone then secured gold for Fiji in the girl’s 56kg division as a snatch of 62kg helped her to a total of 136kg to ensure she was crowned Commonwealth Youth Games champion at the expense of Biatrice Gabell of Scotland and Mauritius’ Lent Ketty.

In the final weight division to take place today, the boy’s 56kg event, Jamjang Deru cruised to a confident success as he lifted a total of 237kg, 20kg in front of nearest challenger Talha Talib of Pakistan.

Ronny Jesos added another medal to the Malaysian tally as he won bronze.