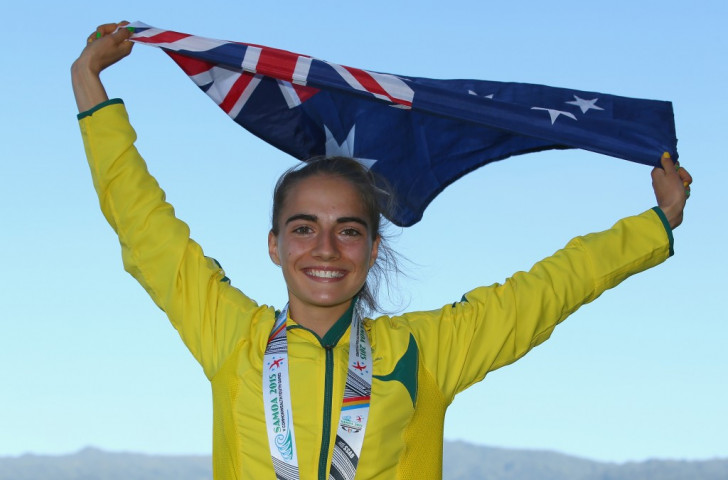 Australia’s Amy Harding-Delooze produced a superb display to snatch girl’s 1500 metres gold from under the nose of Ugandan Peruth Chemutai on a dramatic opening day of athletics at the 2015 Commonwealth Youth Games here today.

The outstanding individual performance of the first session came when Kumari Taki of Kenya clocked an outstanding 3:39.90 to take the boy's 1500m title, a time only Taki himself has beaten this year, having run 3:36.38 when he won the IAAF World Youth Championships in Cali in July.

Amid scorching temperatures at the picturesque venue, nestled in front of a stunning backdrop of Samoan scenery, Harding-Delooze was able to save her best form for the final few metres as she caught and passed a shocked Chemutai, whose celebrations at the finish line proved to be premature.

The 17-year-old Australian clocked 4min 18.02sec, with an embarrassed Chemutai having to settle for silver, while fellow Ugandan Janat Chemusto comfortably took bronze.

South Africa’s Tiotliso Gift Leotlela, fifth in the 200m at the International Association of Athletics Federations World Youth Championships in Cali, Colombia, earlier this year, fared better in the 100m as he powered to gold thanks to a time of 10.20sec.

Leotlela’s victory never looked in doubt from the start as he used his large stride to eat up the metres, easily finishing in front of nearest challenger Rechmial Miller of England, while Scotland’s Cameron Tindle was third.

In the girl's race, Nigeria were the dominant nation as Abolaji Omotayo Oluwaseu clocked 11.59, with team-mate Etim Aniekeme Alphonsus 0.05 seconds behind to complete a near-podium sweep for the African nation.

Scotland’s Alisha Rees held off the challenge of Lucy Sheat of New Zealand to seal bronze.

England’s Emma Hamplett had the honour of being crowned the first gold medallist of the Games, claiming the girl’s javelin title with a throw of 49.57 metres, finishing ahead of Shanee Angol of Dominica and St Lucia’s Rochelle Etienne.

Due to a lack of participants, the girl’s and boy’s 4x400m relay races were held simultaneously, with the Jamaican quartet of Leonardo Ledgister, Michael Bentley, Leon Clarke and Jauavney James benefitting from a Kenyan disqualification to secure boy’s gold in 3:13.45.

The top-performing girls team were Nigeria as individual medallists Oluwaseu and Alphonsus returned to the podium alongside Adiakerehwa Blessing and Idamadudu Praise Oghenefejiro, who finished in 4:02.75.

Kenya laid down a middle distance race marker as Taki led home a one-two for the African country in the boy’s 1500m, clocking an outstanding 3:39.90, edging compatriot Lawi Kosgei.

The two Kenyan athletes finished streets ahead of the rest of the field, with Australian bronze medallist Brodie Modini nearly 15 seconds adrift of second place.

Elsewhere, the success continued for South Africa as they clinched two of the three podium positions in the boy’s discus as Werner Jakobus Visser threw 60.94m to seal gold.

Benjamin Fisher got Northern Ireland up and running on the medal table as he did enough to claim bronze.