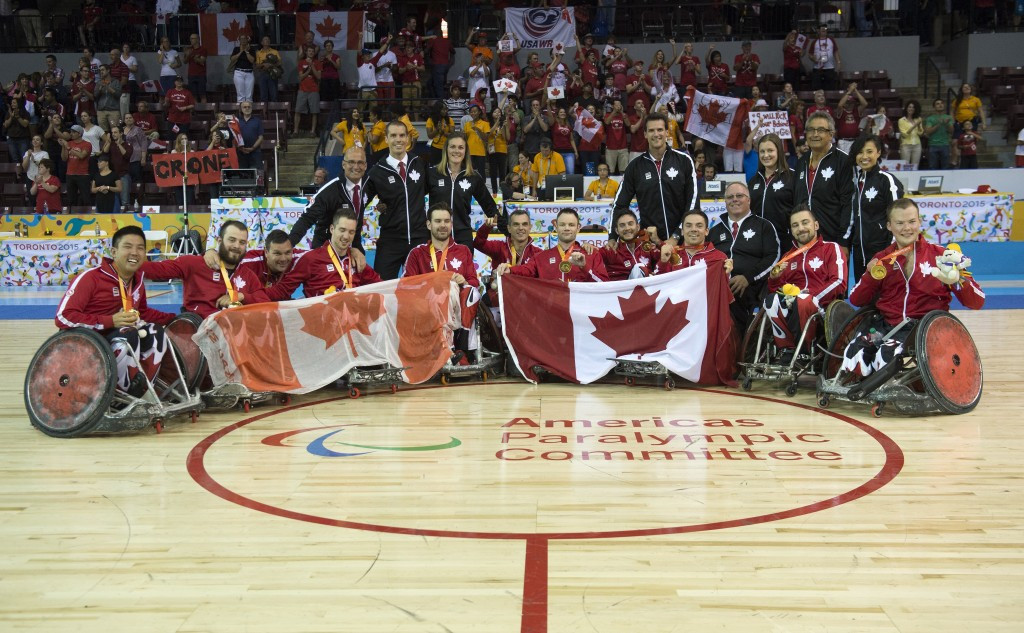 Canada’s wheelchair rugby team came from behind to defeat arch-rivals the United States in the Parapan American Games gold medal match, victory also securing them a place at the Rio 2016 Paralympics.

The home team were smarting from their overtime defeat to the US in the round robin phase of the tournament but their aim to gain revenge in the final got off to the worst possible start, as they fell 4-1 down in the opening minutes.

They were able to grow into the match, however, as the opening quarters wore on and they were still in contact when the whistle went for half-time, although the score read 30-26 in their rivals favour.

With a packed crowd offering their support the Canadian team edged their way back into the tie, entering the final quarter level.

The momentum continued to swing into their favour and they completed the turnaround, winning 57-54, earning their first major wheelchair rugby gold since the 2002 World Championships.

"This feeling is incredible, this is worth everything,” said Zak Madell after helping his team to victory.

"This is worth everything, winning gold right here on home soil means more than all of the Paralympics and World Championships combined.

The women’s wheelchair basketball gold medal match also pitted the two nations against each other with the US triumphing 80-72 after a tight contest, but Canada will hope to gain revenge in the men’s final tomorrow after both teams earned comfortable semi-final wins.

It proved to be a frustrating day for American tennis players as they were forced to settle for silver in the men’s and women’s wheelchair singles final, falling to straight sets defeats.

Kaitlyn Verfuerth was the first to suffer defeat as, despite putting up a strong fight.  she lost the opening set on a tie-break to Natalia Mayaraa and the Brazilian then took full control as she brushed her opponent aside in the second set to complete a 7-6, 6-2 win.

The men’s final proved to be a one-sided affair as Argentina’s Gustavo Fernandez dominated his clash with Jon Rydberg to emerge 6-1, 6-2 victor.

The spoils were shared between Brazil and the United States in the sitting volleyball finals.

The Brazilian team emerged as 3-0 victors in the men’s final after their women’s team had fallen to defeat by the same scoreline in their gold medal match.

Both countries met again in the gold medal match of the women’s goalball tournament, Brazil prevailing 7-6 after a closely fought contest.

The host country secured bronze after beating enjoying a comprehensive 11-1 victory over Guatemala.

Brazil’s medal rush continued after goals from Jeferson Da Conceicao and Ricardo Steinmetz Alves gave the reigning Paralympic champions a 2-1 victory over Argentina in the final of the men’s five-a-side football tournament.

The final day of athletics competition at the CIBC Pan Am/Parapan Am Athletics Stadium was headlined by Cuba’s Omara Durand, who earned her third gold medal of the Games, winning the women’s T12 200 metres in a world record 23.67sec.

It saw her add to her earlier triumphs in the 100m and 400m events, underlining her new found status as the fastest female Para-athlete in the world.