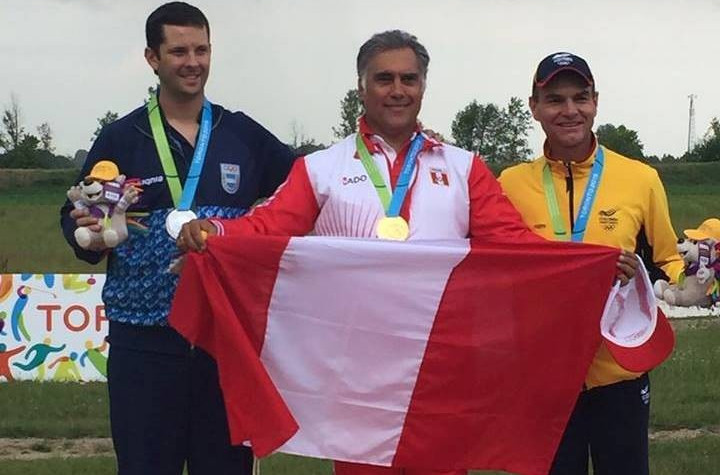 Francisco Boza Dibos, a 50-year-old veteran of seven Olympics and winner of a silver medal 31 years ago at Los Angeles 1984, rolled back the years with a shock trap shooting gold today at Toronto 2015 to secure a quota spot for Rio 2016.

The athlete-turned-official-turned-athlete once again officially gave up the sport three years ago in order to become head of the Peruvian Sports Institute before resuming training last year in an unlikely bid to compete here.

"I never imagined that I would be so lucky to win the gold," Boza Dibos, who carried his Peruvian flag at the Opening Ceremony of his last Games at Athens 2004, said.

"I left the sport three years ago and worked for the Government, I started training in October 2014."

Remarkably, Boza Dibos was not the only half-centenarian to claim gold today as, almost at the same time as he celebrated his victory, United States' Steffen Peters, born a single day before the Peruvian on September 18, 1964, secured the individual dressage title almost two decades after he secure Olympic team bronze at Atlanta 1996.

The German-born rider, who took up US citizenship in 1992 rode Legolas 92 to victory over team mate Laura Graves, while Christopher von Martels of Canada took bronze.

As well as a golden double for two 50-year-olds, day four also included two events in which athletes were unable to be separated and consequently shared the gold medal.

Argentina and Chile both crossed the line in 6min 27.77sec to share the men's coxless pair rowing title before Marvin Kimble of the US and Jossimar Calvo Morena each scored 15.025 to jointly claim pommel horse gymnastics honours.

There was no doubting the winner in the opening pool swimming final of the Games however, as Canada's Chantal van Landeghem shocked US star Natalie Coughlin, winning the 100 metres freestyle in a Games record 53.83sec.

Americans failed to win any of tonight's six finals as the hosts took three golds, Brazil two and Argentina one.

Brazil's victory in the men's 4x100m freestyle relay - despite the absence of star name César Cielo - arguably topped the bill.

On a good day for next year's Olympic hosts, canoe prodigy Isaquias Queiroz added the C1 500m to his earlier 1000m title and London 2012 champion Arthur Zanetti won the gymnastics rings event, before Luciano Correa and David Moura each claimed judo victories in their respective under and over 100kg competitions.

There was disappointment in judo for world under 78kg champion Mayra Aguiar, however, as she was beaten by an ippon in a high quality final by reigning Olympic champion Kayla Harrison of the US.

The US remain in second on the medals table on 19 golds, six behind Canada.

The gap was closed as they enjoyed a comfortable victory over the host country in the women's water polo final, winning 13-4 to take a third successive Pan American Games title.