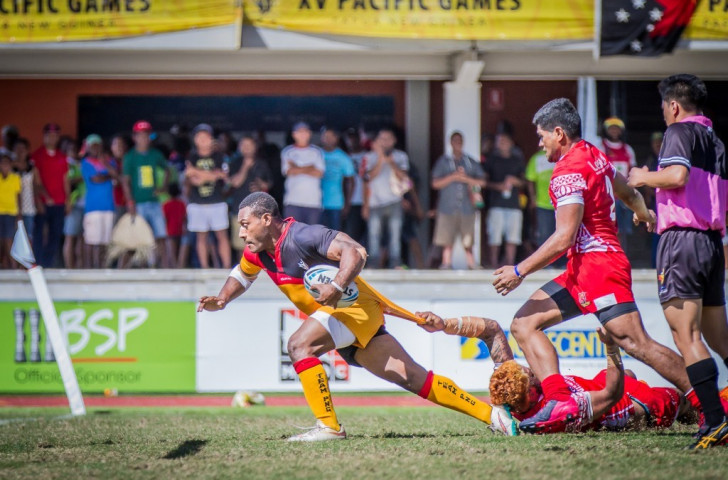 Hosts Papua New Guinea lived up their favourites billing as they cruised to Pacific Games rugby league nines gold with a commanding 38-10 victory over Samoa at the Sir John Guise Stadium on the eighth day of action at Port Moresby 2015.

The team, made up entirely of players from the PNG Hunters, the top rugby league side in the country, made light work of a Samoa side desperate to cause an upset and stun the expectant crowd inside the Stadium.

The writing was on the wall almost from the off for Samoa, though, as Papua New Guinea steadied their nerves with an early try before they went on to record a convincing win.

Player of the tournament Wartovo Puara Junior scored two tries, as did Oti Bland Tony, to help the home side to a commanding triumph which consolidated their position at the top of the Pacific Games medals table with a total of 78 medals, 35 of them gold.

It proved to be a disappointing day for Fiji, who suffered defeat to Samoa in the semi-final before losing 16-14 to Tonga in the bronze medal match.

While their performance may have come as a surprise, there can be little doubt hosts Papua New Guinea were worthy winners following a dominant performance throughout the tournament, where they picked up six wins out of  before reigning supreme in the final.

“It was a big performance by all the team, and with one of our players ending up winning player of the tournament, it’s really good for the code and for all of Papua New Guinea,” Papua New Guinea coach Michael Marum said.

Elsewhere, Guam ended their long wait for a first Pacific Games basketball gold following defeat in the five of the previous six finals by securing a 78-61 triumph over Fiji at the PNG Power Dome.

The victory saw them banish the disappointments of past events as they proved too strong for a Fiji side looking to follow the women onto the top of the basketball podium following their victory over American Samoa yesterday.

Joseph Blas top-scored for Guam with 21 points, while William Stinnett III and Jesus Cruz made notable contributions of 18 and 12 respectively.

The win was particularly memorable for Guam coach E.J. Calvo, who himself had been part of two teams to suffer the agony of defeat in the gold medal match.

“It feels amazing, an experience we’ll never forget,” he said after leading Guam to their first Pacific Games gold medal in the sport since Suva 1979.

“I’ve played in a couple of these, and to fall short, you never forget that and now to finally bring a gold back to Guam basketball, to put our programme at the next level, is great.”

New Caledonia rounded off a dominant performance in the swimming competitions at Port Moresby 2015 with double gold in the men's and women's open water event at Loloata Island, the start of which was delayed due to stormy conditions the previous night making it difficult for organisers to place course the course buoys.

The races were supposed to be over 5 kilometres but were reduced to 3km due to the weather and shallower water than normal caused several swimmers to suffer minor cuts and bruises.