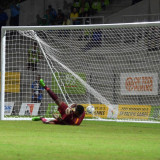 Fiji secured their place in the Rio 2016 men’s football tournament after a 4-3 penalty shoot-out win against Vanuatu, who were given a second bite of the cherry in the Olympic qualifying event following New Zealand’s controversial exclusion from the competition earlier today.

With the match finishing goalless after extra-time, Jale Dreola scored the decisive penalty to end the hopes of Vanuatu, a team that only found out they would be playing in the final this morning when a protest against New Zealand’s fielding of an ineligible player in their 2-0 semi-final defeat to the Kiwis was upheld.

Vanuatu were handed a 3-0 walkover after the Oceania Football Confederation (OFC) Disciplinary Committee ruled that South African-born Deklan Wynne was ineligible to compete due to him acquiring a new nationality under Article 7 of the Regulations Governing the Application of the FIFA Statutes.

"We were preparing to play New Zealand in the morning and then we find out it’s Vanuatu, but it didn’t make any difference to us," said Dreola, whose country have never before qualified for the men's Olympic tournament.

"Since I was at school I used to be good at taking penalties, so I told the boys I was confident and I wanted to take it.

The two finalists were level at 3-3 after the allotted five penalties, before which Vanuatu’s Chanel Obed scuffed his effort wide of the post, setting the stage for Dreola to step up and fire his team to victory.

Vanuatu, ranked 197th in the latest FIFA world rankings published last week, were unable to rediscover their goalscoring touch from a 46-0 Pool A win against the Federated States of Micronesia as they missed a number of chances, particularly in the first half.

"We dominated the first half and the second half - we had so many great chances," said Kaltack’s brother Brian, Vanuatu’s captain.

"I don’t know what happened - it’s hard luck, but we accept it.

"It was a strange day because we had no idea what the management and staff had been doing.

"We were just sitting there after lunch waiting - then they told us it would be Vanuatu versus Fiji in the final.

"So we just got our stuff and went straight to the field."

Despite lodging an appeal over the decision reached by the OFC and pushing for the final to be delayed, New Zealand Football claim no response has been received.

The national body also insists it was not aware of the disciplinary hearing after apparently being told the matter would be referred to FIFA.

"While we firmly believe tonight’s match should have been delayed, we will continue to do everything in our power to ensure that any final decision is only reached after a proper and fair process has been carried out," said New Zealand Football chief executive Andy Martin.

"We trust that Oceania Football Confederation will change its position and conduct that proper and fair process."

The Pacific Games men's football competition continues on Wednesday (July 15) with both semi-finals taking place at the Bisini Sports Grounds.

The gold and bronze medal matches are scheduled for Friday (July 17) at the Sir Hubert Murray Stadium.