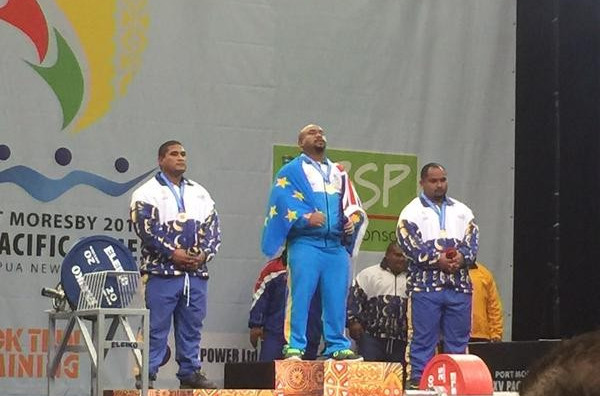 Telupe Iosefa etched his name into the history books as he became Tuvalu's first-ever Pacific Games gold medallist with victory in the men's 120 kilograms powerlifting event.

Samoa and Nauru, meanwhile, both claimed two titles on an action-packed day at Port Moresby 2015.

Iosefa lifted a total of 805kg, finishing ahead of Nauru’s Robert Jun and John Tsiode, winners of silver and bronze medalsrespectively.

The result made Tuvalu's arduous journey to Papua New Guinea's capital all the more worthwhile following a weather-hit voyage which delayed their arrival here until just two hours before the Opening Ceremony last Saturday (July 4).

Samoa's Matile Sitagata lifted a combined total of 550.5kg in the women’s over 84kg category from her best snatch and dead lift efforts to comfortably clinch gold ahead of Tahiti’s Alexandrine Fanaura, more than 100kg behind, while Fijian Elesi Ikanidrodro was third.

Sitagata's compatriot Ofisa Junior Ofisa managed 715kg in the men’s 93kg division, giving him victory in front of Ronald Raboe of Nauru, who enjoyed their best day at Port Moresby 2015 so far, and Tahiti’s Hinau Teotahi.

Jezza Uepa also managed to top the podium to cap off a superb day for Nauru at the PNG Power Dome, taking the men’s over 120kg honours with an impressive 965kg to finish ahead of Oliva Kirisome of Samoa.

Henry Vagi was cheered on vociferously by the home crowd and he provided them with another moment to savour by sealing bronze.

Elsewhere, Samoa's joy continued at the Bisini Sports Grounds after their touch football mixed team stunned the home crowd with a narrow 9-7 win over the host nation.

The victory saw Samoa go some way towards avenging their defeats to Papua New Guinea in both the men’s and women’s team finals earlier this week.

Elsewhere, New Caledonia added to their considerable medal total with a one-two in the single barrel mixed event at June Valley Shooting Range as Kevin Lipegon edged Phillippe Simoni to gold, while Samoa’s Eddie Pao earned his nation’s first bronze at Port Moresby 2015 by clinching the final spot on the podium.