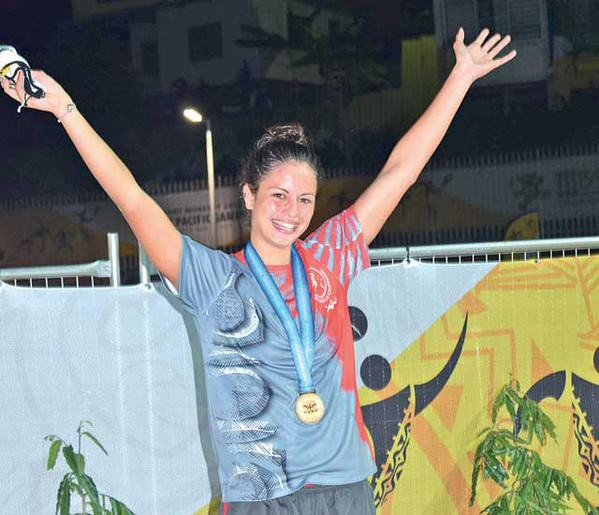 New Caledonia were the dominant force on day three of the Pacific Games swimming competition here, claiming four of the seven gold medals on offer, including in the mixed 4x50 metres medley relay event.

The quartet of Emma Terebo, Adeline Willams, Thibaut Mary and Julien-Pierre Goyetche posted a time of 1min 49.94sec to finish ahead of Papua New Guinea and Fiji in second and third respectively.

In the first final of the evening, Terebo had claimed the women’s 100m backstroke title in a Games record time of 1:02.60.

The 16-year-old finished 5.85 seconds clear of compatriot Suzanne Afchain in second to secure her fourth gold medal of the Games, while Fiji’s Cheyenne Rova took bronze in 1:08.59.

Lara Grangeon bagged New Caledonia’s second gold of the day in the women’s 400m freestyle event, clocking a Games record 4:20.40 to finish a massive 15.60 seconds in front of second-placed Matelita Buadromo of Fiji.

Grangeon, winner of five gold medals at these Games so far, was also joined on the podium by fellow countrywoman Charlotte Robin, the bronze medallist with a time of 4:41.97.

New Caledonia’s third gold medal came via Williams in the women’s 50m breaststroke in a time of 32.61.

Elsewhere on a busy evening of swimming action, home favourite Ryan Pini won the men’s 100m freestyle in 50.63 to take his gold medal tally to three.

Stephane Debaere was Pini’s closest challenger, 0.41 seconds behind in the silver medal position, while fellow Tahitian Hugo Lambert was a further 0.37 back in third.

Lambert went one better in the men’s 400m freestyle, but despite bettering the previous Games record time, he still ended up 6.08 seconds behind fellow countryman Rahiti De Vos, who took gold in 3:56.82, with New Caledonia’s Jeremie Dufourmantelle third.

The swimming action is due to continue tomorrow when a further seven medal sets are due to be awarded.