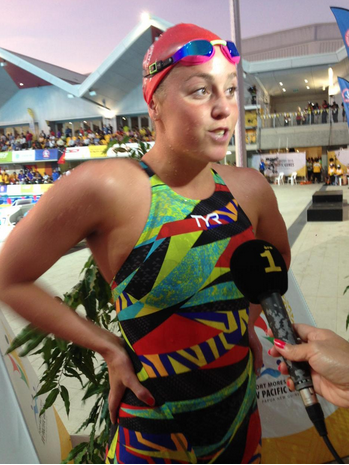 Lara Grangeon won two of New Caledonia's three gold medals on the second day of the Pacific Games swimming competition here, coming out on top in the women’s 200 metres freestyle and breaststroke events.

The 23-year-old, winner of the 400m individual medley and 4x100m freestyle relay events yesterday, clocked a Pacific Games record time of 2 min 03.77sec in the freestyle to finish ahead of Fiji’s Matelita Buadromo and compatriot Lea Ricarrere, who came second and third respectively.

She then went on to triumph in the breaststroke with another Games record time of 2:33.20, more than 11 seconds quicker than Papua New Guinea’s Tegan McCarthy, whose fellow countrywoman Savannah Tkatchenko took third.

Prior to Grangeon’s two successes, compatriot Emma Terebo won the women’s 50m backstroke event in the first of six finals this evening.

Following on from her gold medals in the women’s 100m freestyle and 4x100m freestyle yesterday, the 16-year-old registered a Games record time of 29.18 seconds to stave off the challenge of Fiji’s Caroline Puamau by 0.65 seconds and fellow New Caledonian Suzanne Afchain in third.

In the evening’s other action, Papua New Guinea’s Ryan Pini added gold in the men’s 100m butterfly to that which he won in the 50m backstroke yesterday with a Games record time of 53.42 seconds.

Another home swimmer Sam Seghers was just over two seconds behind in the silver medal position, while Tahiti’s Rahiti De Vos came through in third.

De Vos topped the podium however in the men’s 4x200m relay along with teamates Hugo Lambert, Stephane Debaere and Anthony Clark.

The swimming action continues tomorrow with seven more medal sets to be awarded.