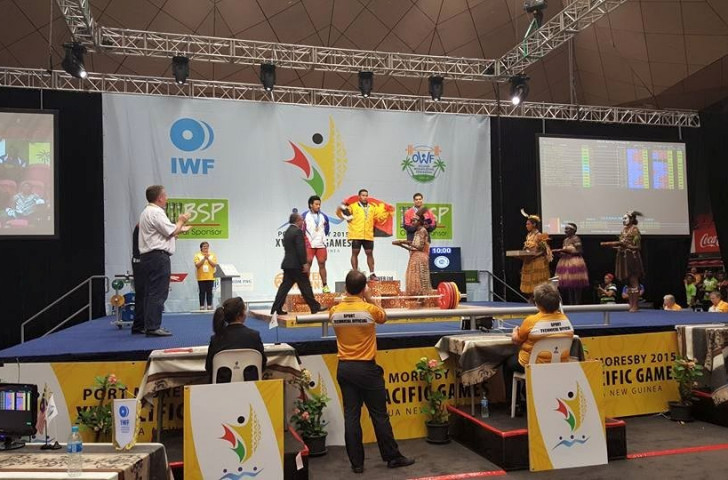 The 2014 Commonwealth Games champion knew he had to lift 11kg more than his opponent to secure the clean and jerk and overall titles and he managed to hoist the bar high above his head, sparking wild scenes of joy and celebration inside the arena.

Kari had earlier crumbled under the pressure in the snatch event as Leusio won gold with a lift of 150kg, and the Samoan looked on course to sweep the division when he lifted 193kg in the clean and jerk.

The crowd gasped when it was announced Kari would be attempting 204kg but he made it look easy, which ensured he turned the prospect of treble silver into the reality of double gold.

Elsewhere, blind weightlifter Malek Chamoun of Australia was denied a hat-trick in the men’s 84kg on body weight after he lost out on the clean and jerk crown to Samoa's Petunu Opeloge by a slender 1kg margin.

The 26-year-old, who lost his sight as a child and who was accompanied onto the platform for each attempt by father George, delivered one of the more inspirational moments of the Pacific Games as he lifted 139kg to secure top spot on the snatch podium.

But Opeloge hit back, sealing gold in the clean and jerk by the same margin which left both competitors locked on totals of 311kg.

The Samoan was declared the overall victor due to the fact that he is 0.02kg lighter than Chamoun, which disappointed the crowd who had given a raucous backing to the Australian throughout.

Fellow Australian Liam Larkins won two bronzes, in the snatch and overall, while Marshall Islands earned a rare medal thanks to Kabuati Silas Bob’s third place in the clean and jerk.

Guba Hale Mea got the host nation up and running in the first category of the day as she clinched two of the three available golds in the women’s 69kg division.

Throughout the event, she was locked in an intriguing battle with Samoa’s Vanessa Lui, bettering her opponent by just 1kg to win the snatch title with a lift of 83kg, before the Samoan got her own back with victory in the clean and jerk by virtue of being slightly lighter in body weight after both lifters registered 105kg.

That result ensured she finished top of the podium in the overall event, a mere 1kg in front of Lui, while New Zealand’s Ruth Anderson-Horrell won bronze medals.

Mary Opeloge of Samoa monopolised the medals in the women’s 75kg, proving too strong for the rest of the field in all three events.

The 23-year-old Commonwealth Games silver medallist was in commanding form, lifting 106kg in the snatch before managing 125kg in the clean and jerk to clinch overall gold with a total of 231kg.

Apolonia Vaivai of Fiji sealed a hat-trick of silvers, while Camilla Fogagnolo of Australia added three bronzes to her nation’s ever-growing medal tally.