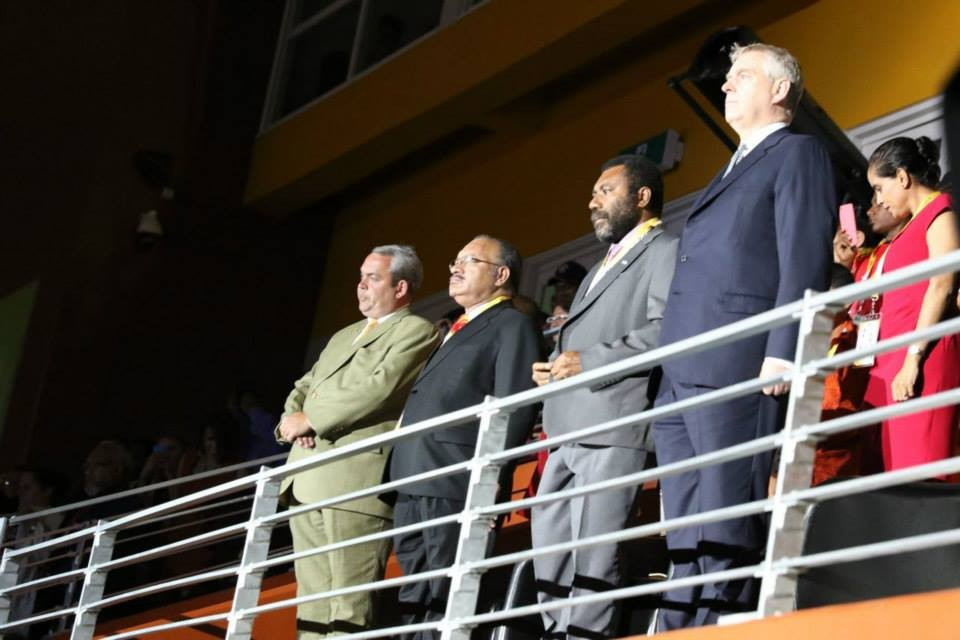 The Duke of York Prince Andrew officially declared the 2015 Pacific Games open amid a mesmerising Ceremony here this evening.

The British Royal did so before Papua New Guinea’s Commonwealth weightlifting champion Dika Toua took to the heights of the Sir John Guise Stadium to light the Games Cauldron and conclude a night of colour, music and dancing that celebrated the host nation’s rich culture.

Once lit, the conch shell ignited the words "wan solwara", meaning one ocean, to signify the unity between the Pacific nations.

"I would first like to congratulate everybody involved on a truly spectacular Opening Ceremony," said Prince Andrew, who delivered a statement on behalf of The Queen wishing all teams the best of luck in competition.

The Ceremony began with 1,000 women and children performing under blue lights that simulated waves surging and splashing from one end of the stadium to the other.

The waves came together to represent a serpent that harked back to Edai Siabo, the father of the Hiri trade, which is a central pivot of the culture, ceremonial and trade life of Motuan people.

Attention then turned to the 12 traditional trade canoes around the Stadium, flanked by women bearing pots and surrounded by dancing Motuans.

This imagery aimed to represent the importance of the hiri trade in the development of early Papua New Guinean society, and particularly the movement of clay pots in exchange for sago, a major staple food for the lowland peoples of New Guinea and the Moluccas, an archipelago within Indonesia.

The Ceremony shortly moved onto the “Call to Nation” segment with the four regions of Papua New Guinea - the Southern, Momase, New Guinea Islands and Highlands - being drawn into the festivities.

The drummers beat out a rhythm that heralded the beginning of the "Sing-Sing, arguably the most spectacular part of the evening.

Sing-sing groups from all corners of Papua New Guinea came together, swaying, bouncing, stamping and chanting in a spectacular scene befitting of the country but on a scale never seen before.

As the sing-sing came to an end, all eyes averted to the entrance of a large Papua New Guinea flag and a group of young locals who recited words from the Papua New Guinea constitution, celebrating the country’s 40th year since gaining independence from Australia.

Led by New Caledonia, the 24 nations represented at the Games soon marched into the Stadium with many pausing on the main stage to perform an impromptu version of their respective national dances.

Predictably, the biggest reception came for the host delegation, headed by powerlifter Linda Pulsan who held the Papua New Guinea flag aloft, stopping at centre stage as her team flowed past her.

More dancing followed on the central stage before a stringband brought the athletes’ parade to a crescendo.

With the athletes in place around the performance area the Ceremony continued, depicting the development of Port Moresby into a modern city.

The Pacific Games ceremonial flag was raised thereafter before a prayer and the athletes’ and officials’ oaths.

Waiwai claimed she believes that the Games have been a powerful catalyst for change in Port Moresby, while O’Neill insisted he is sure the Games will be in history.

“The facilities we have built for you are world-class and they will continue to benefit our Pacific region for years to come," added O'Neill.

“This is a great time to live in the Pacific, we have a great future ahead of us.”