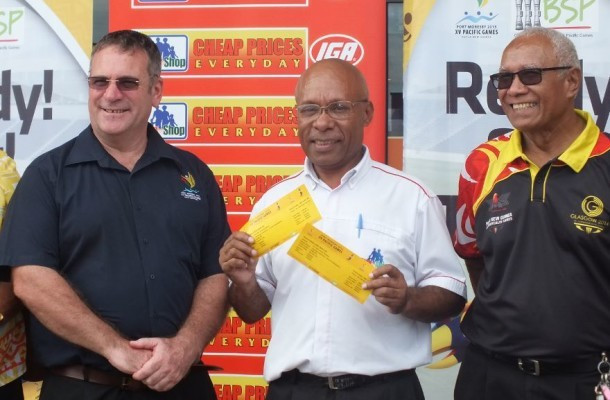 Port Moresby 2015 have announced they have launched additional ticket outlets for the Pacific Games in the Papua New Guinean capital this year.

The public will now be able to purchase tickets from various Stop N Shop and Post PNG Ltd shops, who are part of the CPL Group of Companies, across the country for the eagerly-anticipated event, due to take place from July 4 to 18.

Tickets went on sale in March and the Organising Committee announced recently that they had sold 8,000 seats during the first 11 days they had been available.

The confirmation of further outlets will increase the availability for Papua New Guinean residents as Port Moresby 2015 attempt to include as many people as possible in the spectacle, the biggest sporting event in the country’s history.

The news represents a further boost for the Pacific Games and Port Moresby 2015 chief executive Peter Stewart is confident the multi-sport competition will sell out.

“Ticket sales have been strong with over 1,500 tickets per day selling through Bank South Pacific outlets across the country,” he said.

“With the addition of these new outlets there are 27 outlets to purchase tickets and we are confident sales will quickly accelerate.

“With this achievement, we have no doubt that the tickets may be sold out before the Games start.

“For people who think that they can wait until the last minute, we advise that there might not be many tickets left so it is best you get them from these selected outlets to prevent yourself from being disappointed.”

“We have decided to partner with the Pacific Games because their forward-thinking in sports aligns with CPL’s commitment to continually enhance and progress the sports in the country," he said.

Around 3,000 athletes from 21 Pacific nations are due to compete at the Games in 28 sports, some of which will offer competitors the chance to earn Olympic qualification for Rio 2016.