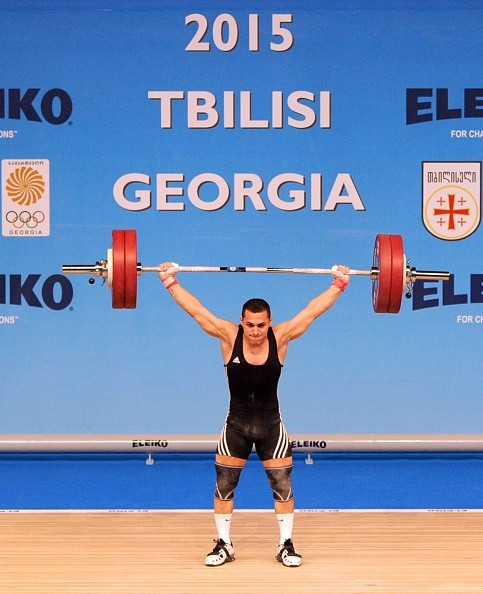 Azerbaijan’s Valentin Hristov has returned following the completion of his two-year ban for doping to perform a clean sweep of the men’s under 62 kilograms events at the European Weightlifting Championships in Georgia’s capital Tbilisi.

The London 2012 Olympic 56kg bronze medallist, who had tested positive for a banned substance at the 2013 European Championships in Tirana, Albania, made his intentions to top the podium clear with a winning lift of 135kg in the snatch competition, ahead of Romania’s Florin Croitoru and Bünyamin Sezer of Turkey, who both lifted 134kg but placed second and third respectively.

Hristov then topped the clean and jerk standings with his lift of 160kg to defeat second placed Cypriot Dimitris Minasidis, who managed 156kg, and third placed Emrah Aydın of Turkey, who lifted 155kg.

The results were enough to see Hristov take the overall gold medal with a total lift of 295kg, ahead of Sezer and Croitoru.

The men’s under 69kg competition also resulted in a clean sweep, this time for Turkey's Daniyar Ismayilov.

The Olympian claimed victory in the snatch with a lift of 156kg, ahead of Frenchman Bernardin Matam with 146kg and Russian Sergei Petrov with 146kg, who placed second and third respectively.

The clean and jerk played out much the same way with Ismayilov coming top with a lift of 181kg, only this time Petrov placed second with 176kg and Matam third with 175kg.

The overall title was Ismayilov’s with his total 337kg lift, while silver went to Petrov and bronze to Matam.

She lifted 90kg in the snatch to top Spain’s Atenery Hernández and Julia Schwarzbach of Germany, who both lifted 83kg, before managing 110kg in the clean and jerk ahead of Turkey’s defending overall champion Ayşegül Çoban with 109kg and Schwarzbach on 103kg.

Paratova reclaimed the overall title with a total lift of 200kg, while silver went to Schwarzbach and bronze to Çoban.

The action in Tbilisi will continue tomorrow to see the medals decided in the women’s under 58kg competition.