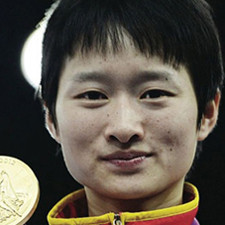 Chinese super-kicker Wu Jingyu dreamed big. Now, she is kick-starting the dreams of youth from her own country and from around the world.

Persistence is a dwindling quality among the young generation, but Wu, double Olympic gold medal winner at Beijing 2008 and London 2012, credits her success on the competition mats to this characteristic. "Everybody has dreams," she said. "But few perist in pursuing them!"

Wu made her global debut at the 2007 World Championships in Beijing, when at the age of only 20, she grabbed gold with a combination of exclusive technique and dynamic power that few could imitate. That win propelled her to the forefront of international taekwondo and led to predictions of Olympic medals. She fulfilled those expectations in the same city the following year.

Wu admits to harboring dreams - but is also prepared to fight to achieve them. Her 13 years of training defines her persistence. Now, she dreams of competing in three Olympiads in a row, like her compatriot, Chen Zhong, winner of Olympic gold at Sydney 2000 and Athens 2004 - and, more than that, to clinch three titles. As the taekwondo player to win consecutive Olympic titles, Chen was Wu's bench- mark.

"We were fighting together in the Beijing 2008 Olympics, which was her third successive Olympics," Wu said. "I learnt a lot from her, I felt her power of never giving up, and that is the power that pushes me to pursue my dreams." Training is tough, but Wu, to coin a Chinese phrase, "eats bitterness" with laughter. "It's like practicing Buddhism: You have to stay calm, ignore all disturbances and taste the bitterness as sugar,"she said. "Then, when you are looking back, all the tough experiences will become great memories and will be definitely worth everything."

Yet there was no guarantee that Wu would achieve her dreams, for between 2008 and 2012, taekwondo was in a state of flux. New competition rules and PSS changed the game. More speed, more combinations and more aggression were the new keys to victory. Would Wu be able to adapt to this scenario and defend her title in London?

On August 8, 2012, in the ExCel London Arena, Wu set foot on the champions' podium in the women's under 49kg category for the second time. She remembers the great joy of the moment. "What is happiness?" she asked. "To me, happiness is that I can persist in whatever I like, and I can persist in pursuing my dreams. If one more kick will take me one step closer to my dreams, why should I stop? My body may feel exhausted, but my heart is delighted." Today, Wu, an Olympic taekwondo heroine, is sharing her dream and inspiring the young generation in China, where she has been invited to schools and universities to share her story.

"Youngsters nowadays meet with few setbacks when they are growing up, so may not have courage and resolution when facing troubles," she mused. "I hope they can be stronger, not only physically but more mentally. I would like to share my experience with them so they can learn that there will be no success if you are only waiting, instead of fighting."

Wu, therefore, felt greatly honoured when she was asked to play a leading role in the preparations for the Summer Youth Olympic Games held in Nanjing in 2014. She felt a strong sense of calling to help youth from different cultures get together to communicate and interact with each other. Her mission began on the occasion of the Nanjing 2014 Youth Olympic Games Culture Festival and the unveiling of the event's official mascot.

Today, Wu is ensuring that she has the right skills to do what she feels compelled to do: In between kicking practice, she is enrolled in higher education.

"I'm now continuing my college education in Suzhou University and my major is English," she said. "Language is the most effective way to exchange your opinions with others. With proper communication, I can learn more from athletes and coaches from other coun- tries. This is a great opportunity to me, and I can help young people in China to be more independent, more confident and more inclusive in their way of pursuing dreams."

Wu won a bronze medal at the 2014 Asian Games in Incheon but her sights are set on bigger goals. Rio 2016 is getting closer and she can hear it calling.