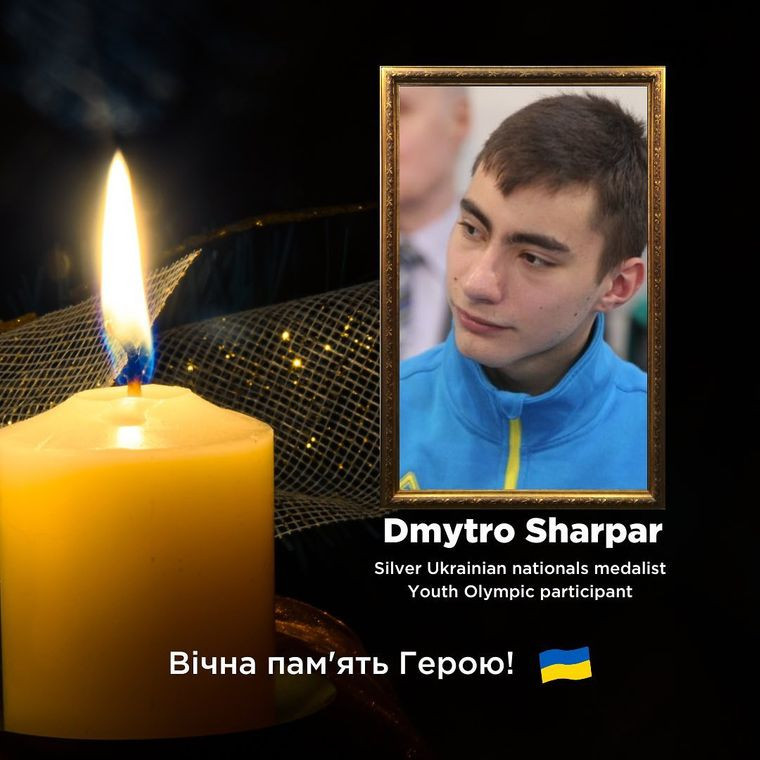 The International Olympic Committee (IOC) has said it "is deeply saddened to hear of the death of Ukrainian figure skater Dymtro Sharpar", who was killed aged 25 during fighting in Bakhmut, a city in the Donbass region in the East of the country.

So far, no further details have yet emerged about the circumstances of his death.

"The IOC is deeply saddened to hear of the death of Ukrainian figure skater Dmytro Sharpar, who had competed at the Winter Youth Olympic Games, and all the members of the Olympic Community in Ukraine who have lost their lives in this war," the IOC statement said.

"The IOC extends its most sincere condolences to their families and friends and the Ukrainian people."

At their meeting on Wednesday, the IOC Executive Board vowed to "continue and even strengthen the full and unwavering commitment to solidarity with the Ukrainian athletes and the Ukrainian Olympic community."

Sharpar is the first to be listed by the authoritative Olympic database Olympedia as a direct casualty of the fighting.

Anton Gerashchenko, an adviser to Ukraine's ministry of internal affairs, paid tribute to Sharpar as he shared news of his loss.

"Dmytro was a talented figure skater, competed in youth Olympics.

"He will forever remain 25.

Dmytro was a talented figure skater, competed in youth Olympics.

He will forever remain 25.

Sharpar, from Kharkiv in the North East of the country, had qualified for the 2016 Winter Youth Olympic Games in Lillehammer after finishing second in the 2015 Ukraine Championships.

He partnered Anastasiya Pobizhenko, also from Kharkiv, to 10th in the pairs at the Youth Olympics.

After his competitive career, Sharpar skated in the Grand Circus Ice Show.

In another social media post, Skate Ukraine posted pictures from Sharpar’s career and appealed for assistance to his family.

"Eternal memory to the hero, our condolences to the family and friends of the figure skater, " the post on Facebook said.

Other users shared pictures of candles with flowers in the Ukrainian colours of blue and yellow.

Guttsait said this "is killing our people in our country and destroying our infrastructure."

In a video call, Guttsait asked Bach to maintain the ban on Olympic participation by Russian athletes in any capacity at Paris 2024.

During a telephone last night with French President Emmanuel Macron, Zelenskyy had asked him to ensure that athletes from Russia and Belarus would not be able to compete at Paris 2024.

Earlier this month Ukraine's Foreign Minister Dmytro Kuleba had invited sports administrators, including Bach calling for the return of Russian athletes to compete at at Paris 2024, to come and see a ice hockey arena destroyed by a missile strike.

The Altair ice hockey arena, in the town of Druzhkivka in Ukraine's Donetsk region, was shattered by Russian missiles.

insidethegames has contacted the International Skating Union for comment.