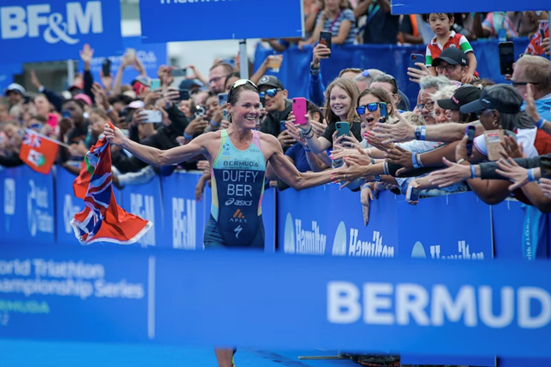 Bermuda’s Olympic gold medallist Dame Flora Duffy has delighted her home crowd in Hamilton as she won the World Triathlon Championship Series (WTCS) Bermuda in a time of 2hrs 1min 26secs to set up a title decider at the end of the month.

Taylor Knibb of the United States clocked 2:01:26 for second one minute and 38 seconds behind Duffy, while Beth Potter of Britain was third in 2:03:17.

It was Duffy’s first race on home soil in almost four years and the home crowds turned out in force to greet their heroine.

Duffy raced only last week in the Ironman 70.3 World Championships but showed no ill effects and was second coming out of the water.

She made a swift transition to the bike and was soon locked into a contest with Maya Kingma of the Netherlands.

Duffy drew away and by the second lap of the run she was already three quarters of a minute in front of her nearest rival and increased her advantage as she ascended a hill named in her honour.

The crowd cheered her home in falling rain.

"It was really difficult to keep my composure," Duffy admitted.

"I really wanted to just enjoy and make the most of this crowd."

And there she is! Our 2022 World Triathlon Series #Bermuda Champion! Flora Duffy!

Amazing race from start to finish! Congratulations @floraduffy! We're so proud of you!????? pic.twitter.com/HYbh5h321u

Her victory means the WTCS title will be decided at Abu Dhabi’s Yas Island on November 26 in a straight shoot out with Britain’s Georgia Taylor-Brown, who missed this race.

Taylor-Brown leads the overall  standings with 3925 points from Duffy’s 3856.

Earlier in the day France's double world champion Vincent Luis won the men’s senior race in 1:49:37 from Antonio Serrat Seoane of Spain in 1:49:45.

Third was another Spaniard Roberto Sanchez Manteconin in a time of 1:49:54.

Olympic mixed team bronze medallist Luis had led coming out of the water and claimed his first podium of the season as he continued his recovery from persistent injury problems.

"Last year I thought I was done, I had all these people believing in me, so I had to believe in myself," Luis said.

Alex Yee of Britain came fifth and heads into the season finale in second place overall on 3732 behind leader Hayden Wilde of New Zealand on 3850.

Wilde did not race in Bermuda.