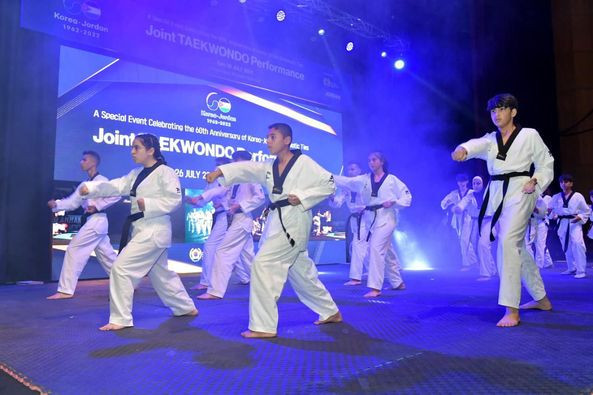 The Jordanian Taekwondo Federation (JTF) hosted a joint event in cooperation with the South Korean Embassy in the country.

Both parties were marking the 100th anniversary of Jordanian-Korean relations, with the event taking place at the Palace of Culture in Amman.

Entertainment included taekwondo performances by the Korean K-Tigers and the Jordanian show team.

Guests included Board members of the JTF and the South Korean ambassador to Jordan, Lee Ji-wan.

Jordan has won three Olympic medals in its history - with two of them coming in taekwondo.

Ahmad Abughaush won the country's first Olympic medal in any sport at Rio 2016, when he clinched gold in the men's 68 kilograms division.

Saleh Al-Sharabaty then won taekwondo silver at Tokyo 2020, in the men's 80kg.

Jordan's other Olympic medal came in karate at Tokyo 2020, courtesy of Abdelrahman Al-Masatfa.