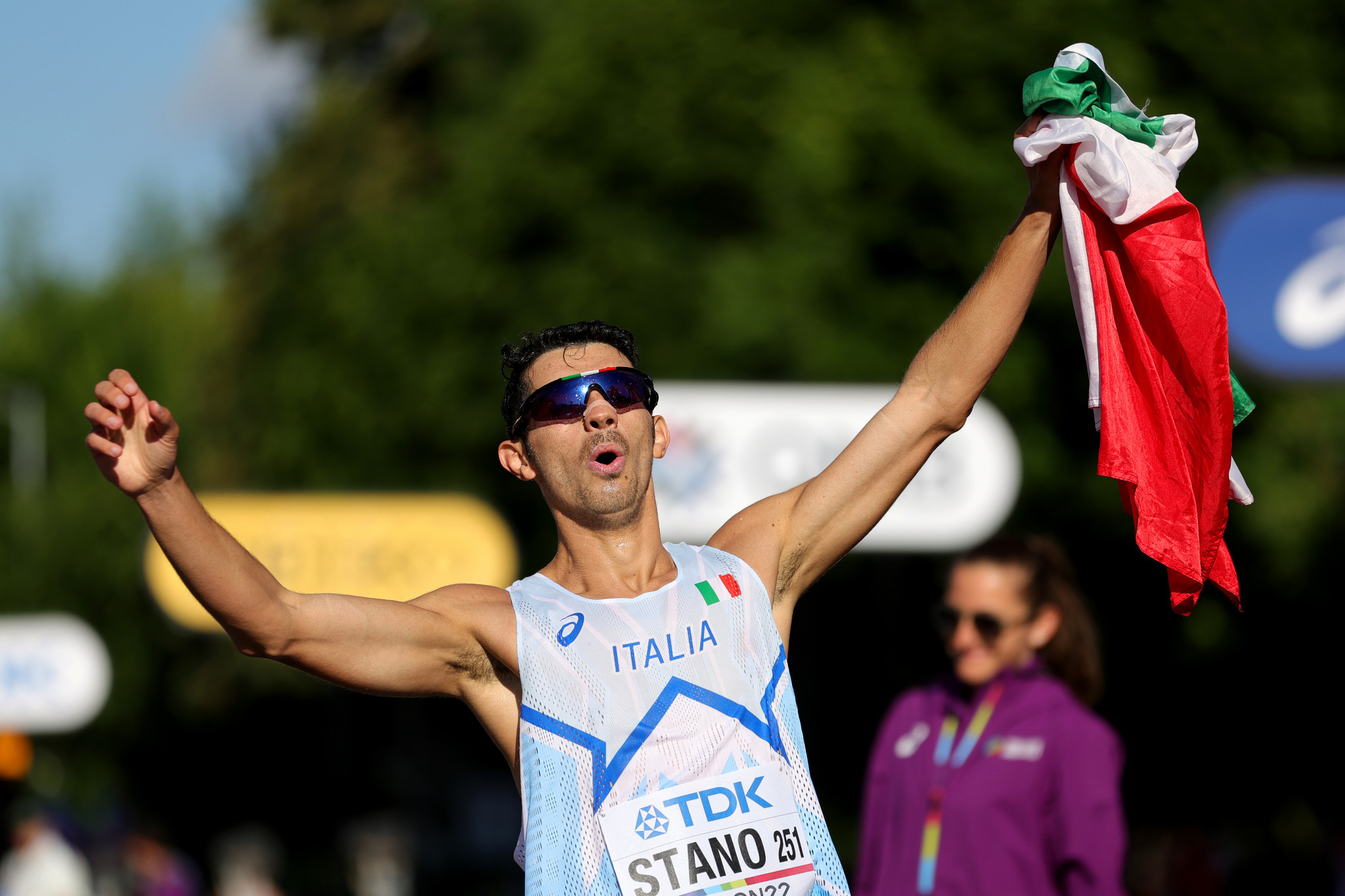 Italy's Olympic 20 kilometres race walk champion Massimo Stano won the first men's 35km walk to be held at the World Athletics Championships in an unofficial world record of 2 hours 23min 14sec on the final day of competition in Eugene, finishing a second ahead of Japan's Masatora Kawano.

The 35km race walk has been introduced, with much controversy, in place of the 50km walk and is now the longer-distance complement to men’s and women’s 20km race walks in all major championships, including the Olympics.

The Italian's mark can only be a world best as no times will be recognised by World Athletics as official world records for this fledgling event until the new year.

Although he looked in control of the closing stages of the race, Stano's winning margin was only one second as Kawano, who had struggled to stay with him as the two walked together over the final 2km, made a despairing final effort before collapsing over the line in an Asian record of 2:23:15.

The Italian was the first to help his stricken rival to his feet.

Sweden’s Perseus Karlstrom, who had won bronze medal in the opening day's men’s 20km race walk behind the Japanese pair of Toshikazu Yamanishi and Koki Ikeda, earned a second in a personal best of 2:23:44.

Unlike Karlstrom, Stano had elected to concentrate his energies on the longer men’s event.

Kawano’s compatriot Daisuke Matsunaga had gambled hugely in the first half of the race, establishing a lead of more than a minute after 12km, but by the 21st he was passed by the pack and eventually finished 26th, more than 10 minutes off the pace.

It was a bold effort from the man who had started the race second in the 2022 world rankings, having finished runner-up to Kawano at the Japanese trials in April in 2:27:09.

The 27-year-old Matsunaga, seventh in the Rio 2016 men’s 20km race walk, was a man on a mission from the off, rocketing along the 1km looped course on Martin Luther King Jr Boulevard in downtown Eugene to create a significant lead of almost half a minute after the lap, which he covered in 3min 59sec, with the pack more than 25 seconds behind.

That lead grew steadily as the pack remained tight, but shortly after the 20km marker the balance of the race tipped and the chasing group became the leading group.

Gradually the pack of eight reduced, to the point that with 5km to go there were five contenders left - Stano, Kawano, Karlstrom, Pintado and He.

He was first to go, then Pintado.

And as the front three moved through the 33km marker the field was reforming into a leading duo with the Swede adrift.

Kawano, desperate to emulate Yamanishi's earlier victory, showed the pain involved on his face and was an utterly spent force at the line.

A Hayward Field, the decathletes had suffered two seismic shocks as they congregated for the second day of their event.

The first was the suspension shortly before competition of the home athlete who tops this year’s world list with 8,867 points, Garrett Scantling, for anti-doping whereabouts failures.

The second was the hamstring injury that halted Olympic champion Damian Warner of Canada during the 400 metres that concluded a first day which he had dominated from the opening 100m.

The overnight lead rested with Puerto Rico’s Ayden Owens-Delerme on 4,606 points from Warner’s compatriot Pierce LePage on 4,485 and home athlete Zachery Ziemek on 4,469.

The Puerto Rican maintained his lead after producing the second-best performance in the 110m hurdles, clocking 13.88sec to reach 5,596 points.

But LePage moved into overall lead after a discus competition in which he produced the third-best effort, 53.26 metres, to total 6,427, with Owens-Delerme, who managed 42.36m, dropping to second place on 6,309 ahead of Ziemek, who maintained his place with a throw of 48.40m.

Jiff Sykora of the Czech Republic won the overall discus event with a World Championship record of 54.39m, followed by Grenada’s Commonwealth champion Lindon Victor, who threw 53.92m to move up into fifth place.

Ziemek also cleared 5.40m to maintain silver-medal position by five points, with LePage, who cleared 5.00m, heading towards the final two disciplines with 7,337.