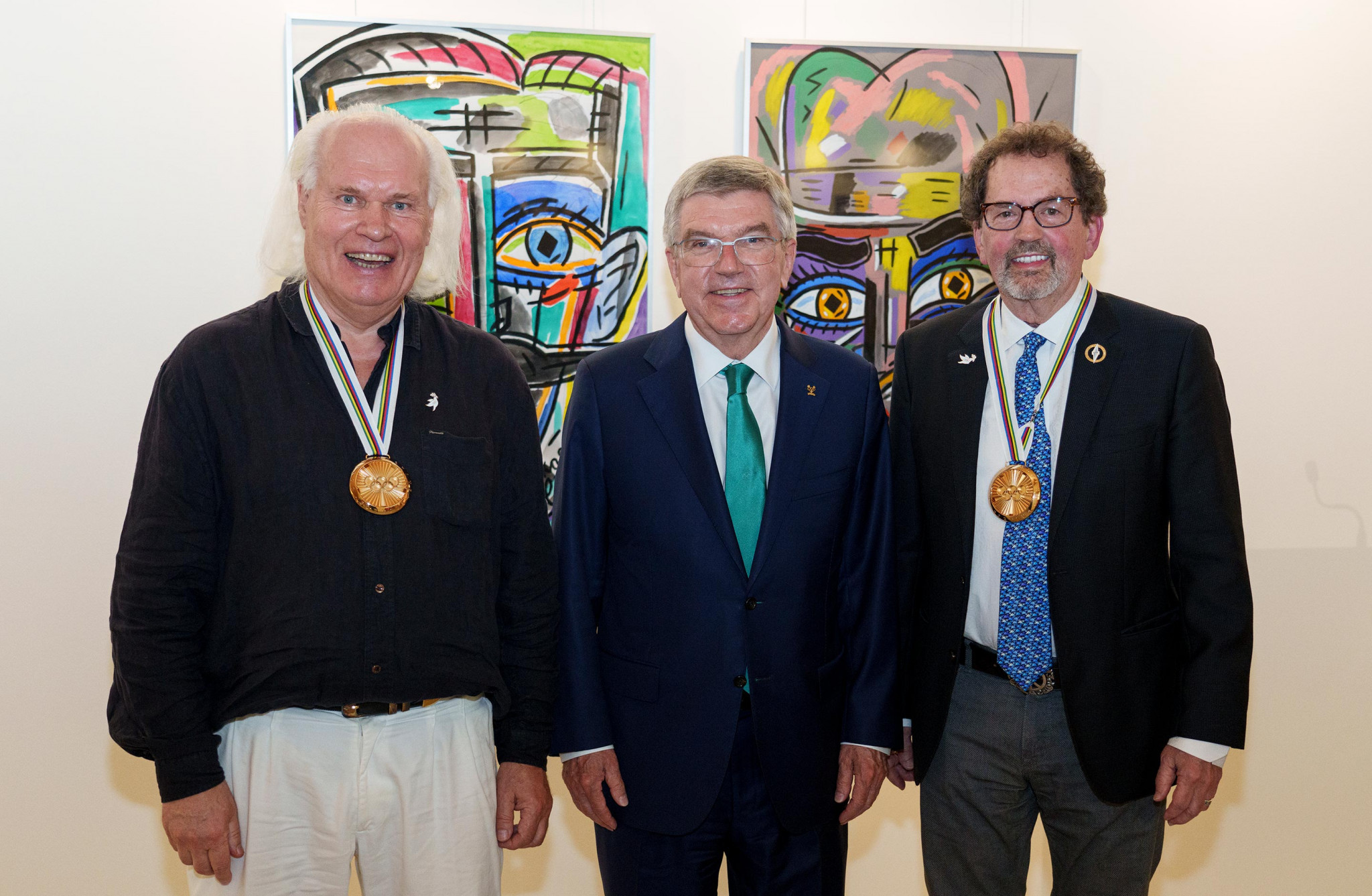 German artist Rolf Lukaschewski and American writer George Hirthler have both been presented with the Pierre de Coubertin Medal in a ceremony to mark Olympic Day.

The medal was introduced in 1997 and is awarded to those who "through their teaching, research and writing of academic works and art in the spirit of Pierre de Coubertin, help to promote the essence of Olympism."

Lukaschewski’s artworks are currently on display at Olympic House and served as a backdrop for the presentation ceremony alongside the work of Portuguese artist Telmo Guerra.

"Our founder, Pierre de Coubertin, who was also an art lover, once said: 'Sport must be seen as a producer of art and an occasion for art,'" International Olympic Committee (IOC) President Thomas Bach told Lukaschewski.

"The paintings displayed here, culminating with the Coubertin ‘Super Star’ portrait, are a perfect reflection of these words and of the vision of our beloved founder and are also a wonderful demonstration of your unique artistic style, which you call positive expressionism," Bach told the artist.

George Hirthler worked as a writer on Atlanta’s successful campaign to host the 1996 Centennial Olympics.

In the course of a career spanning over 30 years, he prepared over 3,000 pages of writing on bid books and Olympic host city campaign material and helped Los Angeles in their efforts to stage the 2028 Games.

He had also written scripts for promotional Olympic films and is a member of the International Society of Olympic Historians.

Hirthler also wrote "The Idealist," a historical novel telling the story of how de Coubertin revived the Olympics.

"The most remarkable illustration of your passion is captured in ‘The Idealist’ telling the unforgettable story of Pierre de Coubertin, the Olympic dreamer and visionary," Bach added.

"In this way, you put the ideas of our founder into historical context and make them available to a global audience," Bach explained.

"I have to admit that I am among those who draw inspiration from this treasure trove of quotes and quite a number of them have found their way into my speeches and messages over the years," Bach admitted.

Hirthler is currently working on a new biography of de Coubertin which he hopes will also be made into a documentary film.

Previous winners of the Coubertin Medal include former Israeli race walker Shaul Ladany who escaped from the terrorist attack at the Munich 1972 Olympics.

Others to receive it include American politician Henry Kissinger, Czech runner Emil Zatopek and Brazilian marathoner Vanderlei de Lima who displayed great sportsmanship after an intruder on the course ruined his bid for Olympic gold at Athens 2004.