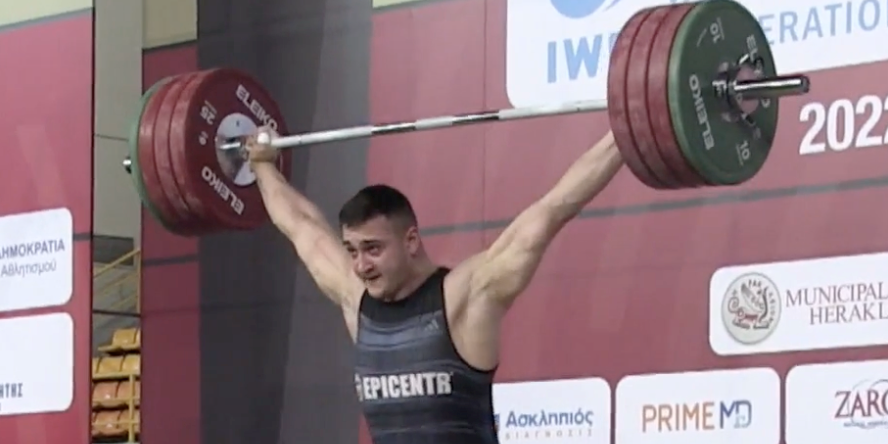 All his rivals had finished, with a best lift of 168 kilograms, in the 109kg snatch session before Hoza came on to the platform.

He could have gone lower to claim the snatch gold but instead opted for his original entry of 180kg, then twice bettered his own junior world record in the snatch, making 191kg and 195kg.

Hoza, 19, made it look so easy that he surely has the senior world record of 200kg, held by China’s Yang Zhe, within his grasp.

In the clean and jerk, in which he has more room for improvement, Hoza again came out after everybody else had finished.

The Colombian Fernando Bonilla earned a big cheer from his team-mates when, after two no-lifts, he made his final attempt to secure the bronze medal on 160-195-355.

Uzbekistan won both the other medal events, setting up an exciting finish to the World Championships tomorrow when the women’s and men’s super-heavyweights complete the programme.

Five nations have won two gold medals and one of them, Indonesia, has no more athletes competing.

That means one of the other four - Turkey, Armenia, Uzbekistan and Ukraine - should finish top of the medals table, and it is likely to rest on the closing men’s event.

If one of those three is to win they will have to make a massive improvement on all known form - 348kg by Oflaz is the best total between them on the IWF database - but judging by today’s men's 102kg contest, anything is possible.

The three medallists collectively improved their personal bests by 145kg.

Second place went to the Armenian Petros Petrosyan on 161-202-363, a modest 14kg improvement on his previous best in the European Junior Championships last year.

In third place, winning a World Championship medal for Palestine for the first time, was Mohammed Hamada on 168-193-361.

That was a 49kg improvement on his previous best total, and 101kg more than he made on his first appearance as a youth lifter in 2019.

Hamada, who was given a tripartite invitation to lift at the Tokyo 2020 Olympic Games, where he finished 13th at 96kg, was disappointed with the jury.

He had three white lights from the referees for his second clean and jerk but it was overturned by the jury for a press-out and he failed with his third attempt too.

It was a landmark moment for him and Palestine, nevertheless.

Olympian Hamada Mohammed from Palestine wins the Gold medal in Snatch during the Men 102KG A Group session! Check out his 168KG Snatch! 🇵🇸🥇 pic.twitter.com/NIERL1Jur4

Hamada was brought up in Gaza City, and has had to train in extremely difficult circumstances beset by "wars and blockades" according to his National Olympic Committee.

A notable absentee in this category, because of the war in Ukraine, was the suspended 2021 champion from Belarus, Siarhei Sharankou, whose personal best is an impressive 374kg.

Uzbekistan’s second winner was Tursunoy Jabbarova in the women’s 87kg, which she won comfortably.

The Iranian Yekta Jamali was fourth with a personal best of 100-121-221, and she took silver in the snatch to complete a good year.

Jamali has won medals in all her three appearances at World Youth and Junior Championships in the past year, an impressive performance given that women’s weightlifting in Iran was forbidden until 2018.