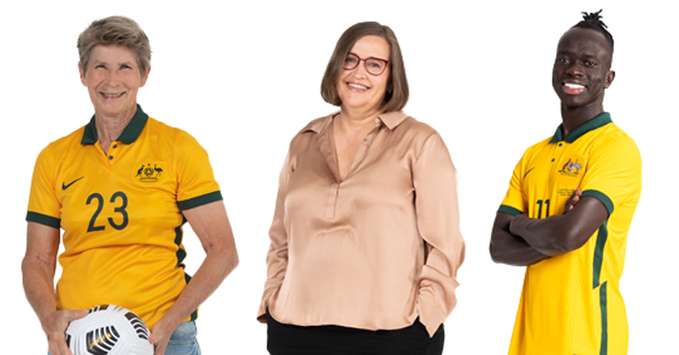 Football Australia has announced Julie Dolan, Kate Jenkins and Awer Mabil as the first members of an ambassador programme in the build-up to next year’s FIFA Women’s World Cup in Australia and New Zealand.

The organisation says the Legacy '23 ambassador programme will raise awareness and advocate for initiatives as part of a legacy plan for the event.

"As one of the nation’s most loved sports, played in every community across the country, we are so proud to partner with a diverse and enthusiastic group of trailblazers to support and advocate for Legacy ’23," said James Johnson, Football Australia chief executive.

"Each ambassador brings a passion for the game and a genuine belief in its ability to shape and contribute to Australian society through our hosting of the FIFA Women’s World Cup 2023.

"They have a deep care for the community and drive to do what’s best for the future of our game, and we can’t wait to see what we can achieve together."

Dolan was the inaugural captain of the Australian women’s national team at the age of 18, and was honoured with the first cap for the team.

She featured in 34 matches for Australia including 18 full internationals.

The Australian Women's Soccer Association subsequently established the Julie Dolan Medal, which is presented to best player in the A-League Women.

"Stepping onto the field in green and gold for the first time was one of the highlights of my life," Dolan said.

"It’s my wish that through Legacy ’23, more women and girls can feel empowered to take to the park at the grassroots level and we can see football participation continue to grow for many years to come, and inspire the next generation of Commonwealth Bank Matildas."

Jenkins is Australia’s Sex Discrimination Commissioner and a member of the Australian Human Rights Commission.

Football Australia said Jenkins is committed to helping the organisation become the first sport to reach equal gender participation in Australia, while building capacity in women’s leadership across football.

Jenkins will work with Football Australia to design and deliver programmes to improve accessibility and pathways for all Australians.

Mabil, a member of Australian men’s national team, said he wanted to be ambassador for the tournament after highlighting the support of his mother and sister to his career.

Mabil grew up with his parents in a Kenyan refugee camp, before settling in Australia.

He secured a contract with Adelaide United and made his debut for Australia in 2018.

Football Australia said further ambassadors will be announced in the build-up up to the FIFA Women’s World Cup, which is being co-hosted with New Zealand.

The organisation says the legacy plan for the tournament will help to ensure Australia realises the long-term benefit the event can have on every community across the country.

Building capacity in women’s leadership to shape the future of Australian sport has also been targeted as well as boosting tourism, trade and international relations to help Australia and New Zealand recover from the coronavirus pandemic.

Nine cities and 10 stadiums across Australia and New Zealand are set to stage matches during the 32-team tournament.

Stadium Australia in Sydney will to stage the final.