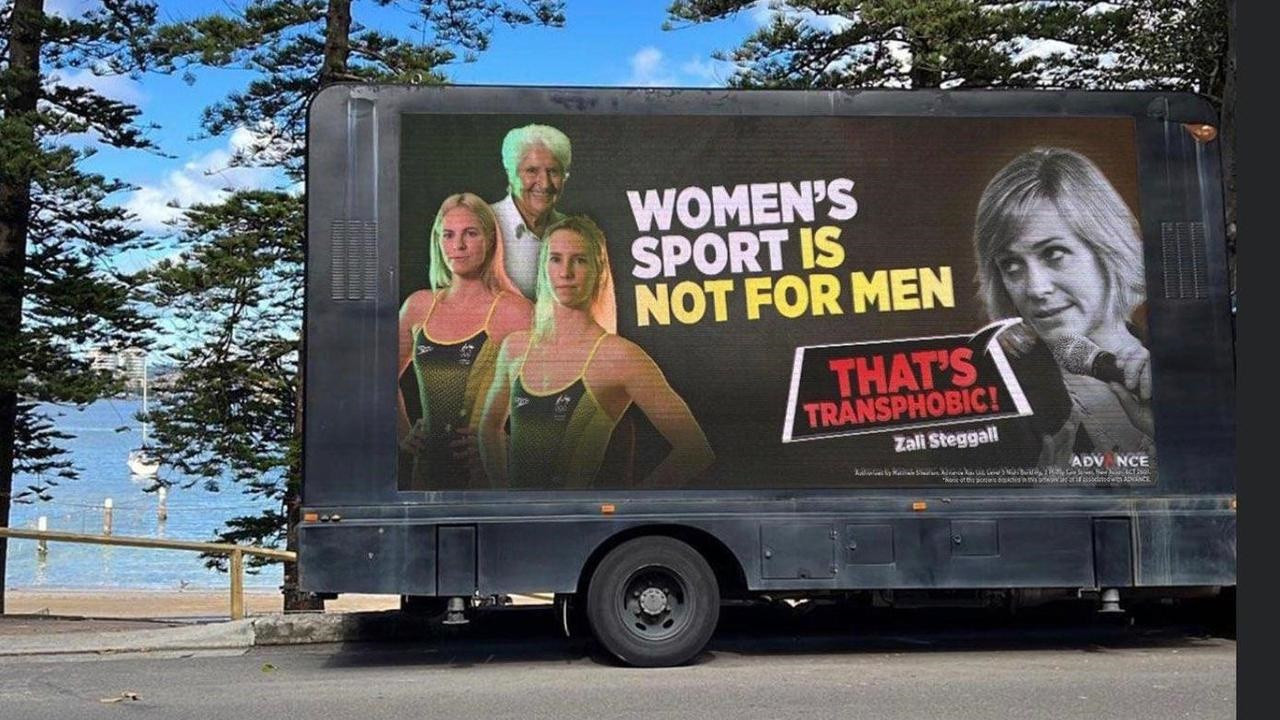 The Australian Olympic Committee (AOC) and Swimming Australia are reportedly threatening legal action against an activist group that used pictures of three Olympic swimming champions in a campaign against transgender athletes in women’s sport.

Images of Dawn Fraser, Emma McKeon and Emily Seebohm feature on billboards next to the phrase "women’s sport is not for men" following their remarks in the transgender row.

McKeon and Seebohm are both pictured in their green and gold Australian national team uniforms that include the Olympic rings.

According to the Sydney Morning Herald, the AOC is looking to send a legal letter to activist group Advance which designed the billboards.

It is reported that the AOC is claiming that Advance used intellectual property without permission.

Advance is campaigning against Olympic Alpine skiing bronze medallist Zali Steggall, who is a Member of Parliament for Warringah, following her support for transgender athletes in women’s sport.

Swimming Australia has warned that it would be prepared to take legal action against Advance should it refuse to take down the billboards but the group has not responded to its calls.

"The statements by Dawn Fraser, Emma McKeon and Emily Seebohm are all on the public record and make the compelling argument that allowing biological males to compete in girls and women’s sport just isn’t fair," a statement from Advance read.

"The country’s best swimmers have made their views clear, so where is the sport at?

"Swimming Australia should be honest about what they plan to do to address the concerns of Australian parents.

"It’s incredible that the media have become obsessed over who is allowed to use a photo rather than calling out sports bodies and politicians over this important issue."

Fraser, who claimed four freestyle gold medals across Melbourne 1956, Rome 1960 and Tokyo 1964, said that she did not think it was "fair to have transgender men competing against women".

"Why don’t transgender people compete against each other?" Fraser told the Daily Telegraph.

"That would solve all the problems."

McKeon, a five-time Olympic gold medallist who earned four titles at Tokyo 2020, conceded that swimming would need to "deal with" the issue of transgender participation because it was "just not fair".

Seebohm, whose 200 metres breaststroke bronze at Tokyo 2020 increased her Olympic medal haul to seven, has also waded in on the transgender row.

"Of course, biological males are always going to be faster and stronger than I will ever be in my life," Seebohm told Nine Network’s Today show.

She has since clarified her stance by saying she wanted to see "trans people live the lives they want".

Fraser has spoken out in the Australian media against the use of her image in the campaign, while McKeon and Seebohm are reportedly considering taking their own action against Advance.

Swimming Australia said it "strongly condemns" the use of imagery of athletes by Advance in "recent political advertising" and claimed consent was never sought prior to its publication from the national governing body or the three swimmers.

"For clarity, if it was sought, it would have been categorically denied," added Eugénie Buckley, chief executive of Swimming Australia.

"Swimming Australia does not endorse this, or any message, from the Advance Australia party.

"Swimming Australia has issued a legal notice to the Advance Australia party and expects the imagery to be removed from circulation immediately.

"Swimming Australia believes in a competitive environment that is inclusive, fair and equitable for all athletes at the same time. Ultimately, all Australians deserve to feel welcome, safe, valued and celebrated in swimming.

"Swimming Australia does not endorse this, or any message, from the Advance Australia party.

"Swimming Australia has issued a legal notice to the Advance Australia party and expects the imagery to be removed from circulation immediately.

"Swimming Australia believes in a competitive environment that is inclusive, fair and equitable for all athletes at the same time.

"Ultimately, all Australians deserve to feel welcome, safe, valued and celebrated in swimming."

Two-time Olympic medallist Maddie Groves disagreed with the view of fellow swimmers as she took to social media to hit out at "transphobic" critics of transgender athletes competing in women’s sport.

The participation of transgender athletes has become a hot topic in Australia after the country’s Prime Minister Scott Morrison expressed his support of the "Save Women’s Sport" bill before performing a U-turn.

If passed, the legislation, tabled by Liberal Senator Claire Chandler, would allow sporting organisations to ban transgender women from competing in female competitions.

Swimming Australia President Tracy Stockwell has previously said that the organisation would consider "both inclusive and fair policies" when it discusses the matter at a Board meeting next month.