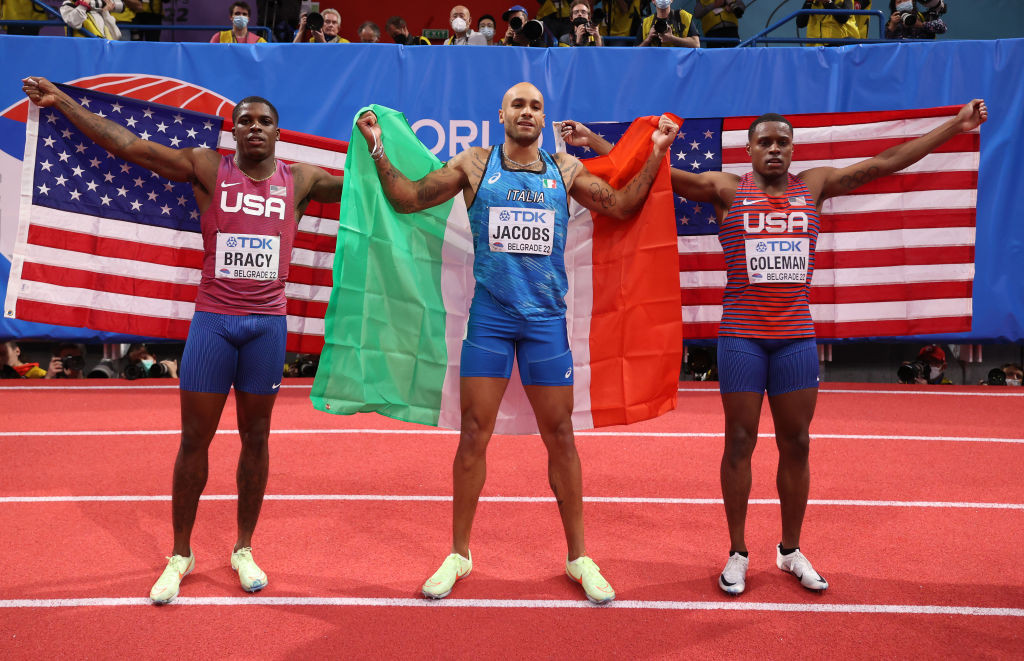 In the end it happened just as Jacobs, shock winner at the Tokyo 2020 Olympics, had predicted, as he kept in touch with the superfast-starting Coleman - who missed the Olympics due to a six-month ban for anti-doping whereabouts failures - and then won on the dip.

Coleman, defending the title he won four years ago in Birmingham, was also credited with 6.41, with bronze going to Coleman’s compatriot Marvin Bracy in a personal best of 6.44.

The United States had earlier suffered another significant reverse in the men’s shot put, where their double Olympic champion and world indoor and outdoor world record holder Ryan Crouser suffered a rare defeat.

The mighty American had to give best to the amiable Brazilian, Darlan Romani, who inflicted upon him his first loss since the epic Doha 2019 World Championships final.

Romani, who has come so close to big medals in recent years - fifth at the Rio 2016 Olympics, fourth at Doha 2019, fourth again at Tokyo 2020 - hit the spot in the Stark Arena with a Championship record of 22.53 metres which tops this year’s world lists.

It had appeared to be business as usual for Crouser as he opened with a Championship record of 22.44 metres, but he could not improve upon it, even after Romani attained peak performance in round three.

But the United States had a far happier time in the women’s pole vault, where Sandi Morris became only the second woman in history to successfully defend the world indoor pole vault title as her third-time clearance of 4.80 metres proved decisive.

An early failure at 4.60m put Morris behind on countback for the majority of the competition as her team-mate, Olympic champion Katie Nageotte, who has been hampered by an ankle injury, sailed over four consecutive heights at the first attempt before 4.80m proved too much.

If ever an athlete deserved a turn of luck it was Morris, one of only four women athletes to have cleared 5.00m, whose ambitions of adding Olympic gold to the silver she won at Rio 2016 ended when she was injured when her pole snapped in mid-air during a rainswept qualifying session.

A blistering start by double Olympic 400 metres champion Shaunae Miller-Uibo earned her a first world indoor title as the Bahamian athlete held off the late charge of 21-year-old Dutch athlete Femke Bol to win in 50.31sec.

22.53m for Darlan Romani who breaks the #WorldIndoorChamps and South American indoor record in the process. pic.twitter.com/Ewf9OQ47Fg

Bol, the Olympic 400m hurdles bronze medallist, had fallen onto her face over the line as she tried in vain to overtake Jamaica’s 33-year-old Stephenie Ann McPherson in her semi-final.

But she showed no ill effects as she sought to apply pressure to her 27-year-old rival, who had won only one previous indoor medal - world bronze at Sopot in 2014.

Bol clocked 50.57, and McPherson earned bronze in a national indoor record of 50.79.

Ethiopia’s world record holder Gudaf Tsegay was in a class of her own in the women’s 1500m final - as were Ethiopia as a team in winning gold, silver and bronze on the night.

But Tsegay, who set her record of 3min 53.09sec in Lievin last year, finished more than 30 metres clear of her team-mates Axumawit Embaye and Hirut Meshesha in a Championship record of 3:57.19.

Jereem Richards of Trinidad and Tobago fully honoured his late friend and team-mate Deon Lendore, killed in a car crash two months ago, by winning the men’s 400 metres title in a Championship record of 45.00.

Richards thus became the first athlete from his country to win this title - one to which Lendore twice came close, finishing in bronze medal position at this event in Birmingham four years ago, and Portland, Oregon in 2016.

Trevor Bassitt of the United States was his only serious challenger, taking silver in 45.05.

Canada’s Olympic champion Damian Warner missed heptathlon gold by just five points last time round in Birmingham - but four years on he made sure as he restored the lead he had held for the majority of the competition by finishing third in the concluding 1,000 metres - and crucially well clear of the leader after six events, Switzerland’s Simon Ehammer.

After winning the morning’s pole vault with 5.10m, the latter led narrowly from Warner coming into the last event - 5634 points to 5611 - but the Canadian, who had a personal best that was superior by around 14 seconds, only needed to finish a couple of seconds in front of his 22-year-old rival to resume golden position at the close.

France’s 21-year-old Cyrena Samba-Mayela, who has got better and better in the course of the women’s 60 metres hurdles event, came through for a superlative gold in a national record of 7.78 after a performance that was almost faultless.

The men’s 800 metres final was lacking two of the pre-event favourites in Britain’s Elliott Giles, second fastest of all time indoors, who pulled an intercostal muscle before his heat, and Kenya’s Collins Kipruto, whose form unravelled dramatically in the final 30 metres of his first race in the arena.

But it was not lacking in excitement or drama.

Manuel Garcia, who likes to mime the revving of a motorbike before he starts his races, was at full throttle in the closing stages of the men’s 800m final as he hung on to earn Spain’s first gold in the event since the precursor to the first edition in 1985.

After early leader Marco Arop of Canada ran out of gas after 650 metres Garcia moved into the lead and was soon under pressure from the outside lane from Kenya’s extravagant 17-year-old talent Noah Kibet.