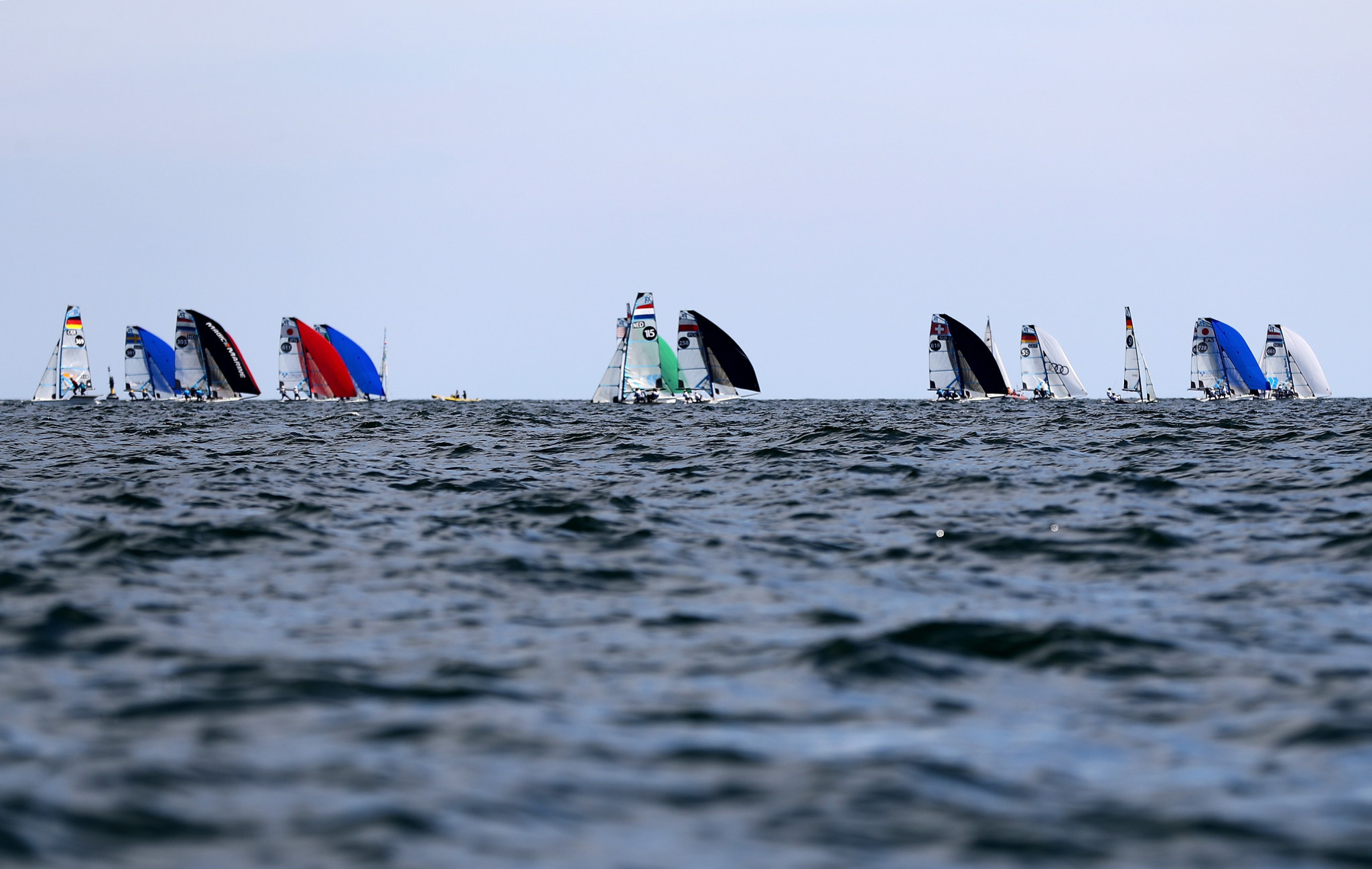 Dutch sailors top two of the standings at the 49er, 49erFX and Nacra 17 World Championships in Mussanah as Bart Labriex and Lars wan de Werken continue to lead in the 49er and Odile van Aanholt and Elise Ruyter enjoyed a fine day in the 49erFX.

After dropping to second yesterday, van Aanholt and Ruyter started today with a pair of fifth-placed finishes, then came second in the final race held at the Barcelo Mussanah Resort in Oman.

With 49 points, they are now six ahead of the former leaders Helene Næss and Marie Rønningen of Norway, whose efforts were hampered by a difficult middle race in which they finished 20th.

That serves as their drop race, and an overall 55 points has them second in the standings.

Olympic champions Martine Grael and Kahena Kunze of Brazil won the 11th race of the Championships and capitalised on a mixed day for Finland's Ronja Grönblom and Veera Hokka to move onto the podium.

Grael and Kunze recorded 11th and ninth places on either side of their victory, while Grönblom and Hokka notched double digits in the first two races before coming fourth in the final race of the day.

The Brazilians are on 61, two-thirds of the way through racing, with the Finnish duo on 69.

Stephanie Roble and Maggie Shea of the United States finished third in the second race of the day but slipped further off the pace with 81 after recording double digits in the first and third races.

On a day described by Germany's Fabian Graf, who is second with Tim Fischer, as "quite difficult", Labriex and de Werken had their lead cut to two points.

"The breeze was unstable and it was choppy so it was difficult to keep the boat moving and pick the right lane and the correct side of the run," Graf added.

Today was the first session of racing for the gold fleet, and although the German pair scored double digits for the first time at the Championships, that is their drop race and finishes of fifth and seventh have them on 54 points.

Labriex and de Werken held a four-point lead overnight, which was halved as they scored seven, nine and five to move onto 52.

French sailors Kévin Fischer Guillou and Noé Delpech topped off a fine day by winning the final race to move onto the podium with 58.

After winning the last two races of yesterday, Ian Barrows and Hans Henken of the US continued their climb up the standings as they now sit fourth with 65.

The Americans were third across the line in the first race, although could only follow it up with back-to-back 10th placed finishes.

Ireland's Robert Dickson and Sean Waddilove began the day in third place but posted a 17 and 22 either side of a third-place finish as they slipped to 11th with 75.

European champions Mikolaj Staniul and Jakub Sztorch of Poland enjoyed their best day to date, winning the first race and then recording an eighth and fourth placed finish to climb to 10th on 73.

In the Nacra 17 fleet, Gianluigi Ugolini and Maria Giubelei of Italy continued their rapid rise up the standings, and now occupy the gold-medal position after winning the 11th race of the Championship, either side of placing seventh and third.

They have 42 points, with Britain's Tokyo 2020 silver medallists John Gimson and Anna Burnet two behind after a consistent day featuring three top-seven finishes.

Fellow Olympic medallists Paul Kohlhoff and Alicia Stuhlemmer of Germany dropped from first to third after placing 12th and ninth in the first two races of the day, although they did recover to win the last race and finish on 49.

Italy's Vittorio Bissaro and Maelle Frascari slipped off the podium, finishing the day with successive 11th placed finishes and now sitting sixth with 61.

Fourth place is occupied by France's Tim Mourniac and Lou Berthomieu on 54.

The penultimate day of sailing at the Championships is scheduled for tomorrow.