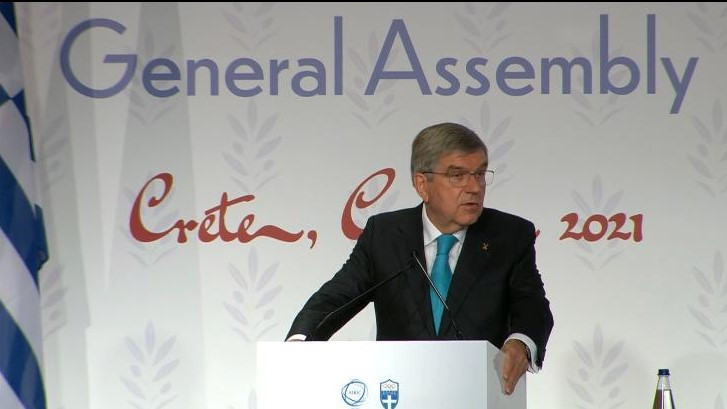 Bach discussed the crisis in Afghanistan during a keynote speech on the opening day of the Association of National Olympic Committees (ANOC) General Assembly here today.

Thousands of people based in Afghanistan have attempted to leave the country since the Taliban returned to power following the withdrawal of American troops.

The Islamist group believes in Sharia law and vigorously restricts the freedoms of women, imposing severe restrictions during its rule from 1996 to 2001 before it was removed in a United States-led operation.

Several organisations have sought to evacuate people considered to be at risk, including women in sport.

Bach said the IOC had assisted with the evacuation of around 300 people from Afghanistan, praising the support offered by several NOCs.

He called for further assistance from NOCs, asking them to work with their Governments to provide humanitarian visas and support evacuations.

"There are still many members of the community in Afghanistan who are at risk, because they are members of our community, we have to and we will help them," Bach said.

"But we need for this the support of as many as possible Governments and NOCs, because we have two challenges - first of all, we need to get them out of the country.

"It is about seats on airplanes, about land routes and other options and alternatives.

"We can only get them out in many cases that we can give the assurance they are welcomed by humanitarian visas in countries.

"First of all I have to thank you, but I would also like to urge those who have already community to continue helping and assisting.

"Please seize this opportunity, try to convince them to get humanitarian visas for members of the Olympic community in Afghanistan and community to safe places."

Bach added that the Afghanistan National Olympic Committee President and secretary general are among those to have been evacuated.

The IOC President repeated the organisation’s support for the recognised NOC in Afghanistan.

He acknowledged that several officials continue to work in the office in Kabul, who are seeking to ensure the presence of Afghanistan within the Olympic Movement in the future.

The official stood up and bowed to attendees.

Earlier this month, FIFA said it had worked with the Qatari Government to evacuate "almost 100 members of the football family from Afghanistan, including female players."

The Australian Government in August provided humanitarian visas to numerous athletes as concerns grew over their safety.