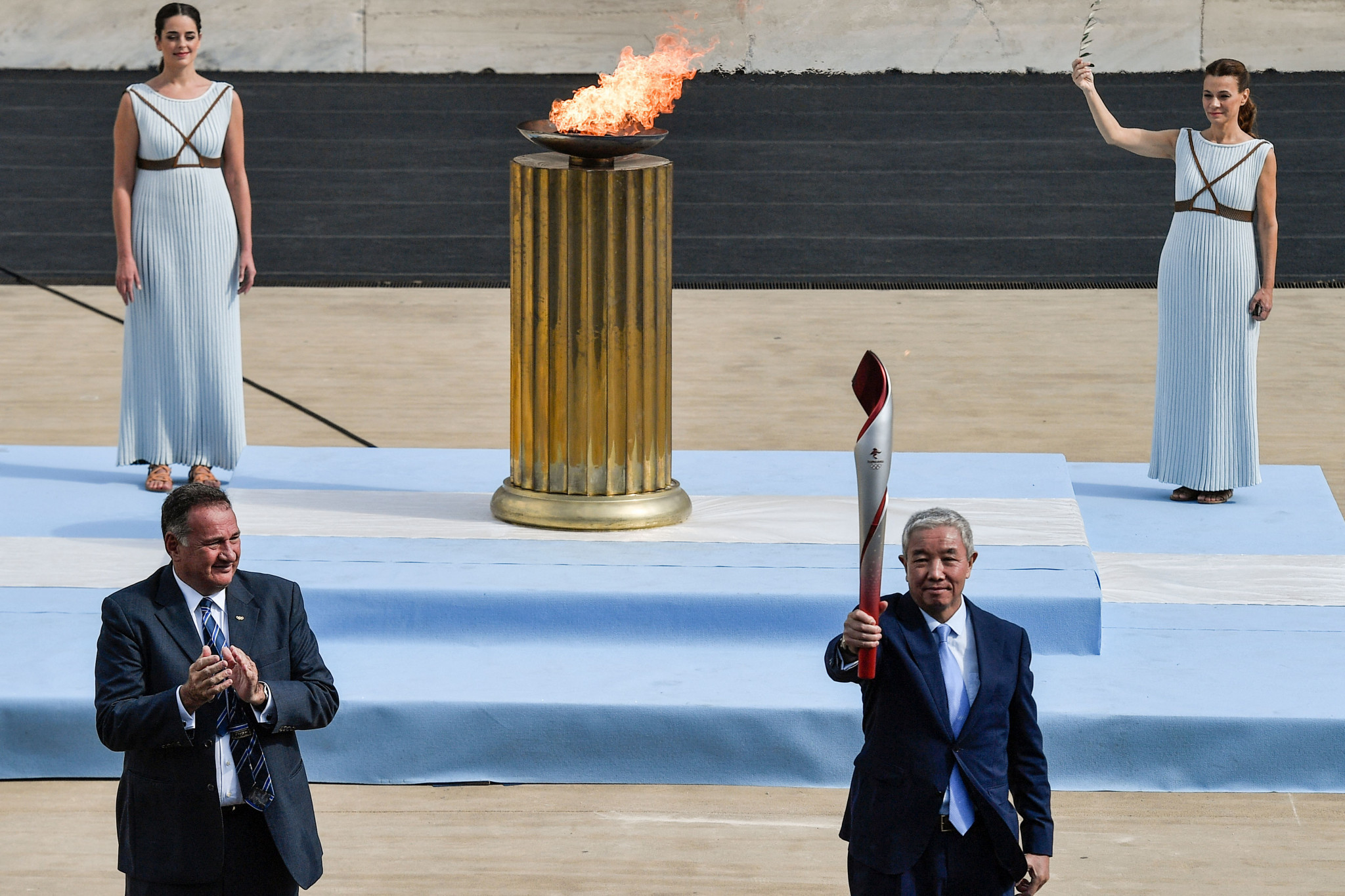 The Olympic Flame has been passed on to Beijing 2022 in a low-key handover ceremony at the Panathenaic Stadium in Athens.

It was held amid tight security after human rights protests at the lighting event in Ancient Olympia yesterday.

There was a very large police presence in the area in front of the stadium and the invited guests were required to pass through airport-style magnetic security checks.

COVID-19 precautions prompted the decision to hold the handover without spectators.

Organising Committee vice-president Yu Zaiqing received the Flame in a safety lantern and carried it from the stadium accompanied by Beijing 2022 Flame Attendants in white uniforms trimmed with blue.

"Over the past 13 years, China’s efforts to promote the Olympic spirit, Olympic culture and Olympic knowledge have never stopped," Yu said, speaking entirely in Chinese.

"The Olympic Movement has witnessed further development in China.

"Beijing 2022 are committed to a green, inclusive, open and clean approach to preparing and hosting the Games," Yu claimed.

His words came as across the city, protest group No Beijing 2022 described the Games as "sportswashing genocide" and renewed calls for the event to be relocated.

The group insists that holding the Olympics and Paralympics in Beijing would be "a defilement to the sacred tradition of the Olympic Games."

The Flame had been brought down from the Acropolis where it had spent last evening under heavy guard in front of the Parthenon.

Cross-country skier Paraskevi Ladopoulou was the last of three Torchbearers in the stadium.

She ran through an avenue formed by the ranks of the Evzones, the elite ceremonial presidential guard who wore the traditional white-pleated skirts known as a fustanella.

Ladopoulou lit a ceremonial gold-coloured cauldron in the centre of the stadium, surrounded by the Priestesses who performed a dance of the Naiades or nymphs to the music of Yannis Psimadas.

The melody was based on archaic instruments, the movements directed by choreographer Artemis Ignatiou.

the cauldron is lit at the centre of the stadium @insidethegames pic.twitter.com/1jFFqwtsW9

The Olympic Anthem first performed in this very stadium in 1896 had been played by the Athens Philharmonia, just as had been the case 125 years ago.

It fell to Hellenic Olympic Committee President Spyros Capralos to pass the Torch to Yu in the moment which formally entrusted the Flame to Beijing 2022.

"Your history, your culture your tradition, your faith in values and your great love of sport, give us the assurance that you will organise excellent Games next February," Capralos said.

The Flame now flies to Beijing, where it is scheduled to arrive tomorrow morning.