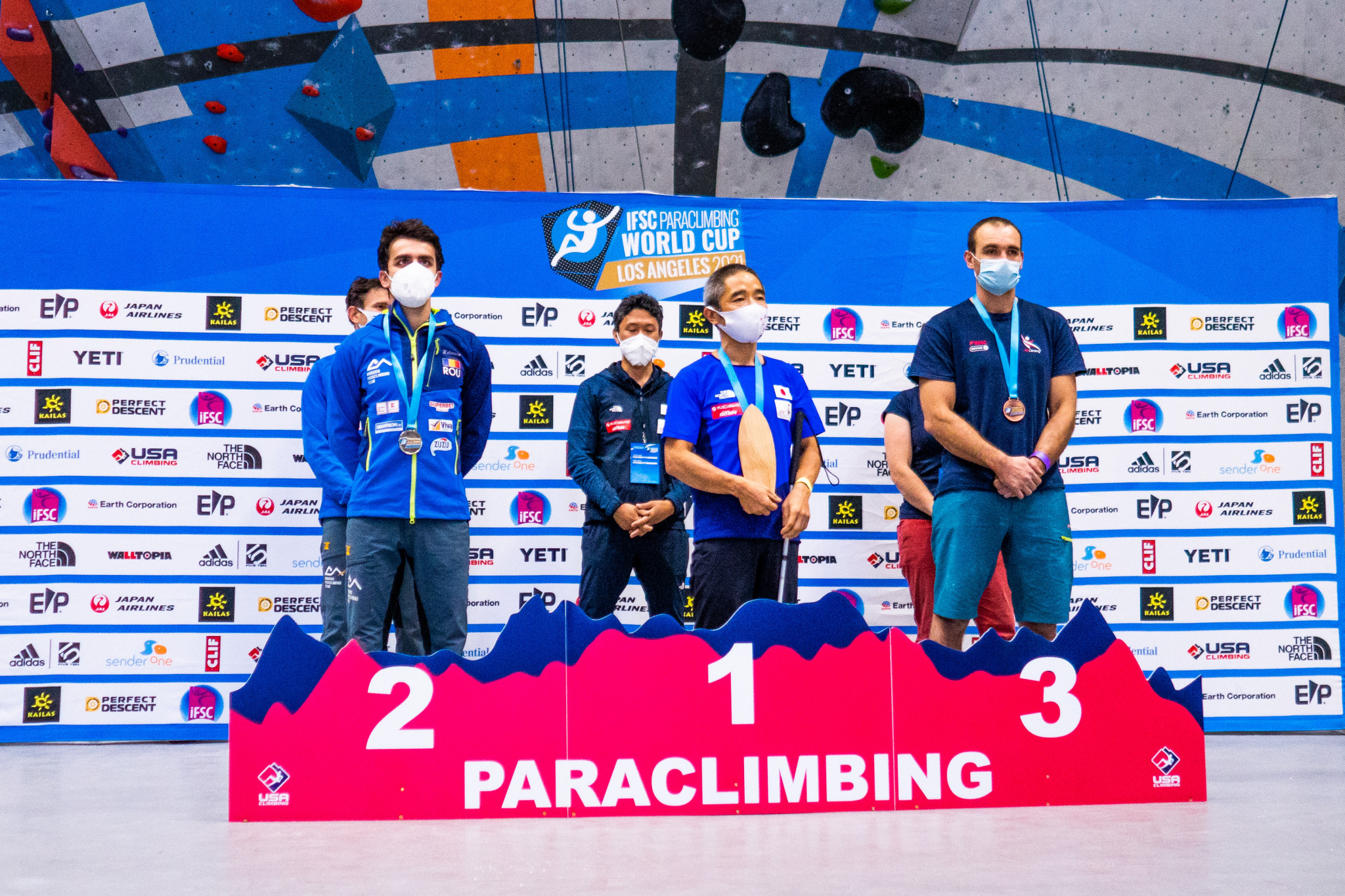 Japan's Kobayashi Koichiro was at his vintage best to claim gold at the final International Federation of Sport Climbing (IFSC) Paraclimbing World Cup event of 2021 at the Sender One Climbing Gym in Los Angeles, while Solenne Piret of France completed a clean sweep of victories for the year.

Five-time world champion Koichiro is now 53, but proved he is still one of the world's best Para climbers by topping the men's B1 lead qualification yesterday, and built on that by reaching the 41st hold to take his first gold of the season.

Romania's Ravan Nedu was second with 35+, and Britain's Jesse Dufton third with 32+.

Later in the day, Piret rounded off a stellar season with a fourth gold out of four at the World Cups and World Championships.

Piret scored 47+ in the women's AU2, while Italy's Lucia Capovilla earned silver with 33+ and American Maureen Beck rounded off the podium with 24+.

Hannah McFadden ensured hosts the United States had a victory to their name as she triumphed on her Paraclimbing World Cup debut in the women's AL2.

The American climbed to the 22nd hold, while silver medallist Emily Gray of South Africa finished with 21+ and Germany’s Jaqueline Fritz 21.

Franck's 46 ensured the pair finished on the podium at each of this year's IFSC Paraclimbing events.

Bronze medallist Tanner Cislaw of the US was further back with 33+.

The Belgian was comfortably the best performer in qualifying, and again in the final as he reached the 43rd hold.

Jake Sanchez and Colin Torpey of the US both notched 25+, with the former's superior record in qualifying earning him the silver.

The best-qualifier rule came into place to decide gold in the women's RP2, with Jasmin Plank taking the victory at the expense of Belgium's RP1 world champion Pavitra Vandenhoven after both finished with 29+.

That ensured Austria was the only nation to come away with two golds from Los Angeles.

Emily Seelenfreund of the US took a bronze on her World Cup debut with 21.

In the last final of the day, Israel's Mor Michael Sapir in the men's RP2 earned his third gold of the year, scoring 56+.

The other three climbers all scored 52+, with Manikandan Kumar of India and Brian Zarzuela of the US claiming joint silver, as there was also nothing to separate them in qualifying.

In the master's competitions, Austria’s Edith Scheinecker took the women's B3 gold, Simone Salvagnin of Italy did likewise in the men's B3, Austria's Katharina Ritt triumphed in the women's RP3 and American Micah Winkle ensured a home success in the men's RP3.

This is the last IFSC Paraclimbing World Cup of the year, following events in Innsbruck in Austria in June and Briançon in France the following month.