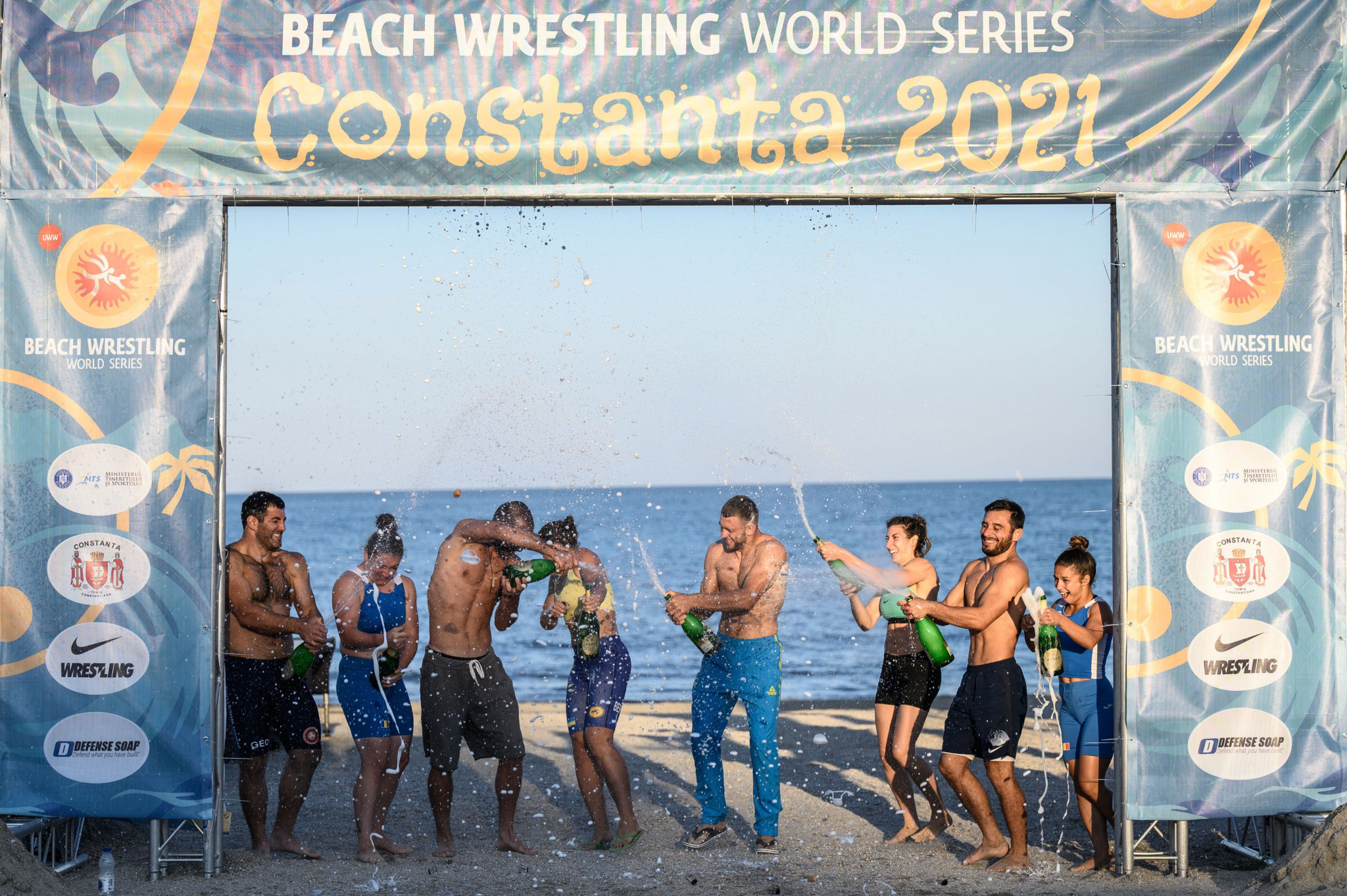 The 2021 Beach Wrestling World Series drew to a close in Constanța in Romania, with Georgia the most successful nation, earning three of the eight overall golds available.

Hosts Romania were successful in the women's under-50 kilogram division as Stefania Claudia Priceputu overcame Turkey's Emine Cataloglu, taking down her opponent with just six seconds remaining to clinch a 3-2 victory.

Priceputu won all four of the Series' legs and was crowned world champion.

Cataloglu won silver, while Ukraine's Tetiana Profatilova came third in Constanța and for the season overall.

Francesca Indelicato of Italy won the women's under-60kg to claim the overall crown, as she was the lightest competitor in a scoreless bout with Ukrainian Anastasiya Kravchenko in the final.

Kravchenko was second for the Series, with Romania's Denisa Iuliana Fodor third despite a 4-2 defeat to Greece's Georgia Gkougkoudi in the bronze-medal bout on home soil.

Ukraine's Alina Berezhna Stadnik Makhynia continued her domination of the women's under-70kg event as she claimed her fourth successive victory against Greece's Agoro Papavasileiou in just 50 seconds in the final to wrap up the world title.

There was a second triumph for Romania in the women's over-70kg category as Catalina Axente beat Ukraine's Iryna Pasichnyk in the final to overtake her in the Series standings and clinch gold.

The men's under-70kg event saw Georgia's Levan Kelekhsashvili clinch the victory he needed to retain his world title as he overcame Turkey's Yunus Coskun in the final.

Coskun earned an overall bronze, with Ukraine's Oleksii Boruta in silver after seeing off compatriot Volodymyr Burukov in the match for third in Constanța.

Vasyl Mykhailov secured his third win on this year's Series to earn his first world title in the men's under-80kg, ending the reign of defending champion Davit Khutsishvili as the Georgian had to settle for silver.

In the men's under-90kg, the winner of the last two World Series events,  Muhammad Inam of Pakistan, faced a surprise group stage elimination, meaning Georgia's Dato Marsagishvili retained his title despite losing to Ibrahim Yusubov of Azerbaijan in the final.

Yusubov secured an overall silver, while Oleksii Yakovchuk of Ukraine picked up bronze for both the event and the Series after beating Turkey's Mahmut Seyfi Ozkaya.

Yakovchuk levelled the scores at 1-1 with only half-a-second remaining, securing the win on the last point tiebreak rule.

Kordzaia lost to Azerbaijan's Oyan Nazariani in the final in Constanța.

In doing so, Nazariani won his second leg of the Series but had to settle for an overall silver after missing the competition in France due to a visa issue.

Vasile Vlad Caras of Romania secured bronze for the event and the Series with a last point scored tiebreak win against Ukraine's Ivan Malin.