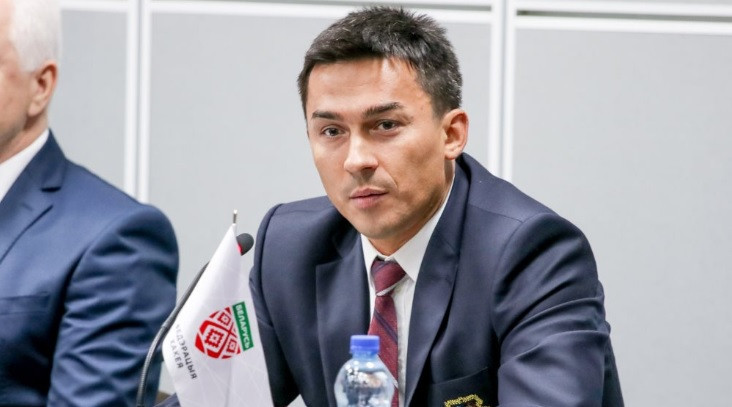 Belarusian Ice Hockey Association (BIHA) President Dmitri Baskov has been suspended for five-years after being found to have directly influenced others to support the country's Government and have threatened and discriminated against athletes for their political opinions.

An International Ice Hockey Federation (IIHF) Independent Disciplinary Board also founded sufficient evidence that Baskov had abused his position as a representative of ice hockey in order to support Belarus President Alexander Lukashenko.

The Board found Baskov to have breached the IIHF Disciplinary Regulations and the governing body’s code of conduct, as well as violating the Olympic Charter.

The IIHF Board also commissioned an independent investigation firm to conduct a review of the publicly-available information regarding the allegations that Baskov had been involved in the death of Roman Bondarenko.

A dossier sent by the Belarusian Sport Solidarity Foundation (BSSF) to the International Olympic Committee (IOC) and IIHF alleged that Baskov participated in attacks on protestors in the months after last year’s controversial Presidential elections.

In November, Baskov was banned from entering Latvia after he was considered as a suspect in an attack on Bondarenko during a peaceful protest in Belarus.

The European Union described Bondarenko’s death as an "outrageous and shameful result of the actions by the Belarusian authorities".

The IIHF revealed that the firm concluded, based on the evaluation of media reports, audio recordings and photographs, that, "although it cannot be excluded that Baskov was present at the event, it did not find evidence for an active involvement of Baskov in the attack against Bondarenko".

The firm had noted Baskov’s avid support of the Belarus leader and his participation in pro-Lukashenko political rallies in 2020, as well as a critical open letter regarding athletes who supported the opposition movement.

Baskov was reported to have fired several "unreliable" athletes and coaches.

The IIHF said both the BSSF report and the firm’s report confirm that Baskov has close personal ties to President Lukashenko, as well as hockey connections with two of the President’s sons".

"After consideration of the various reports, a review of all the facts ascertained, and following a formal hearing with Baskov, the Disciplinary Board’s Deciding Panel determined that the evidence provided by the BSSF give reasonable cause that Baskov could have been present at the event of 11 November 2020," an IIHF statement read.

"However, this was not sufficient proof of Baskov’s involvement in the incident that led to Bondarenko’s death.

"The Deciding Panel determined, however, that there is sufficient evidence that Baskov has tried to directly influence others to support the government and has threatened and discriminated Belarusian athletes because of their political opinion, violating Rule 1.2.2.1 of the IIHF Code of Conduct, and that he has abused his position as representative of ice hockey in order to support President Lukashenko, violating Article 5 of the Olympic Charter in connection with Article 2.1 of the IIHF Disciplinary Regulations and Rule 1.2.2.4 of the IIHF Code of Conduct."

The panel concluded that Baskov be banned for five years based on the violations of the IIHF Code of Conduct and IIHF Disciplinary Code.

Baskov will be prevented from holding his roles as Belarusian Ice Hockey Association President and chairman of the Kontinental Hockey League HC Dynamo Minsk.

The suspension will come into effect from September 10 and is due end on September 9 in 2026.

Baskov was among officials sanctioned by the IOC last year, with the organisation refusing to recognise his position on the National Olympic Committee of the Republic of Belarus (NOCRB) Board.

Lukashenko and his son Viktor, who was named NOCRB President in February, have also been sanctioned by the IOC.

This included banning the officials from attending the rearranged 2020 Olympic Games in Tokyo by the IOC in December after allegations of political discrimination towards athletes.

The BIHA has criticised the decision to remove Baskov as its President, claiming that the decision was made due to "increasing pressure on the IIHF from political forces".

"The BIHA considers the position of the IIHF to remove the head of the national sports federation from national and international activities for expressing a personal civic position and allegedly exerted pressure on athletes and coaches because of political beliefs on the part of BIHA chairman Dmitri Baskov as unacceptable," a statement read.

The organisation added it would consider appealing the decision to the Court of Arbitration for Sport (CAS).

Outgoing IIHF President René Fasel had been criticised earlier this year after he was photographed with Baskov on a controversial visit to Belarus, where he met with Lukashenko to discuss the country’s co-hosting of the IIHF Men’s World Championships this year.

Fasel claimed the meetings formed part of a "balanced approach" to addressing the issues around the World Championships.

Belarus was ultimately stripped of hosting rights amid mounting pressure on the IIHF, with Latvia ultimately serving as the sole hosts of this year’s event.

A series of events have been stripped from Belarus in recent months, after the nation forced an aircraft to land to arrest an opposition journalist.

A series of travel restrictions have been introduced on the nation.

Equestrian's Olga Safronova became the second athlete from Belarus to be granted a humanitarian visa in Poland, after fleeing the nation.

Sprinter Krystsina Tsimanouskaya defecting to Poland last month because she said coaches had ordered her to fly home from the Tokyo 2020 Olympic Games.

The athlete alleged she had been taken to Haneda Airport in Tokyo against her will following social media criticism of Belarus coaches at the Olympics.