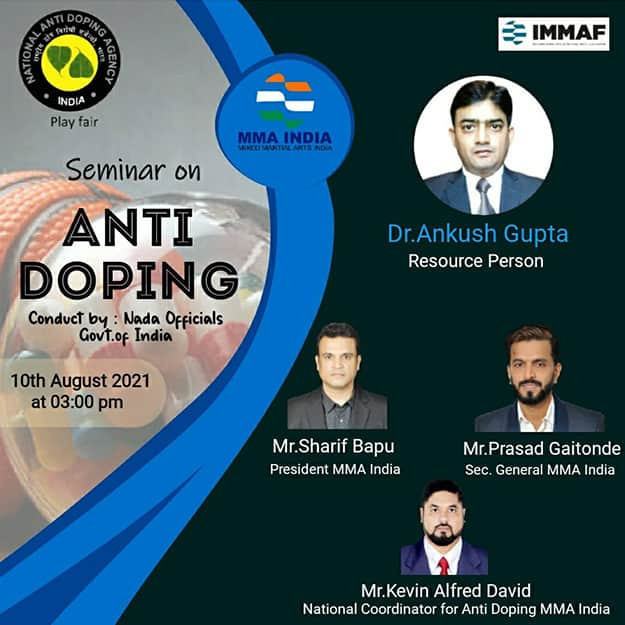 The event was organised by MMA India’s President Sharif Bapu and secretary general Prasad Gaitonde alongside India’s National Anti-Doping Agency, and led by Dr Ankush Gupta from the Ministry of Sports and Youth Affairs.

The one-hour seminar was attended by nearly 70 registered members of MMA India, and a 20-minute question-and-answer session also took place.

President Bapu felt the anti-doping event proved a success as it helped to clarify several queries that members had.

"The NADA officer was quite impressed with our team members as they asked many questions about Therapeutic Use Exemption (TUE) and the use of cannabidiol (CBD) oil by the athletes before the bouts," Bapu told IMMAF.

"I would like to add that one of our team members Kevin Alfred David whom we have appointed as the Anti-Doping Coordinator did a marvellous job in organising the webinar.

"At the end of the day, it is teamwork which counts."

Great development for the sport of MMA in India 👏 🇮🇳 (@CaoiltedeBarra) https://t.co/nwhcJdU0dg

MMA India has additionally held a national MMA referee and judge certification seminar in Mumbai, and sought to make improvements to its educational provisions for coaches.

It has also seen more than 500 students sign up for a colour belt under IMMAF’s grading pathway system, including more than 50 who have received blue-belt status and more than 11 earning a brown belt.

The National Federation is aiming for more than 1,000 young athletes to be graded by the end of the year, and Bapu thanked IMMAF President Kerrith Brown, as well other senior members of organisation in chief executive Densign White and Andrew Moshanov, direcotor of development.

MMA India is one of 27 IMMAF members from Asia.

Its next major event is this month’s India Open Amateur Championship in Indore City, and comes following restrictions on MMA competitions imposed from April due to the country’s lockdown following a surge in COVID-19 infections.

This tournament will serve as qualifying for the IMMAF World Championships in Nur-Sultan, the capital of Kazakhstan, this November and December.