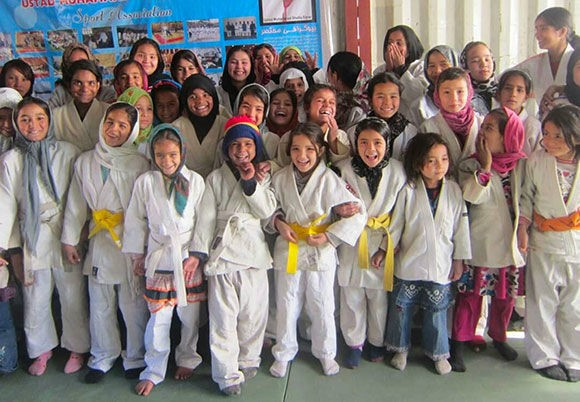 A judo instructor who has introduced the sport to hundreds of women and girls has been able to flee Afghanistan and is safe, according to the International Judo Federation (IJF).

Germany authorities and the German Judo Federation (DJB) aided the escape of the coach, referred to simply as "Linna" by the IJF, who is now in Germany.

Some details cannot be disclosed for security reasons, the IJF added.

"I had to run away from Kabul," the Afghan judoka said after she landed.

"In the crowd around the airport, I lost my shoes and I had to leave barefoot, there were shootings all around.

"I had to leave my country because I was in imminent danger of death.

Linna believes staying in Afghanistan would have been a death wish considering her commitment to female emancipation.

The Taliban, which believes in Sharia law and vigorously restricts the freedoms of women, is back in charge of the country.

Afghanistan's Government and security forces fell apart following the withdrawal of American troops, and the Taliban's return to power has sparked a new refugee crisis and fears for the welfare of thousands of Afghans who lived their lives in manners which the Taliban does not approve of.

Linna made her way to the airport and saw her hopes vanish before her eyes as all flights were cancelled.

The IJF was then alerted of her situation contacted the DJB, which then Linna's escape, it is claimed.

"There were several evacuation plans, plan A, B and C, which were scaffolded with the invaluable help of members of the judo family," said Teo Pop, who works in the IJF Presidential office.

"We exchanged a lot and stayed in constant contact with Linna, as much as it was possible to be but it was she who was there and who was going through this hell.

"It's amazing that she was able to reach Germany.

"We are all very happy about this today."

It is "great news" that Linna is safe, added IJF President Marius Vizer.

"I would like to thank the German authorities, the Deutscher Judo Verband and all those who intervened backstage to allow Linna to arrive on European territory.

"It is great news to know that our sporting family is able to come together in such circumstances."