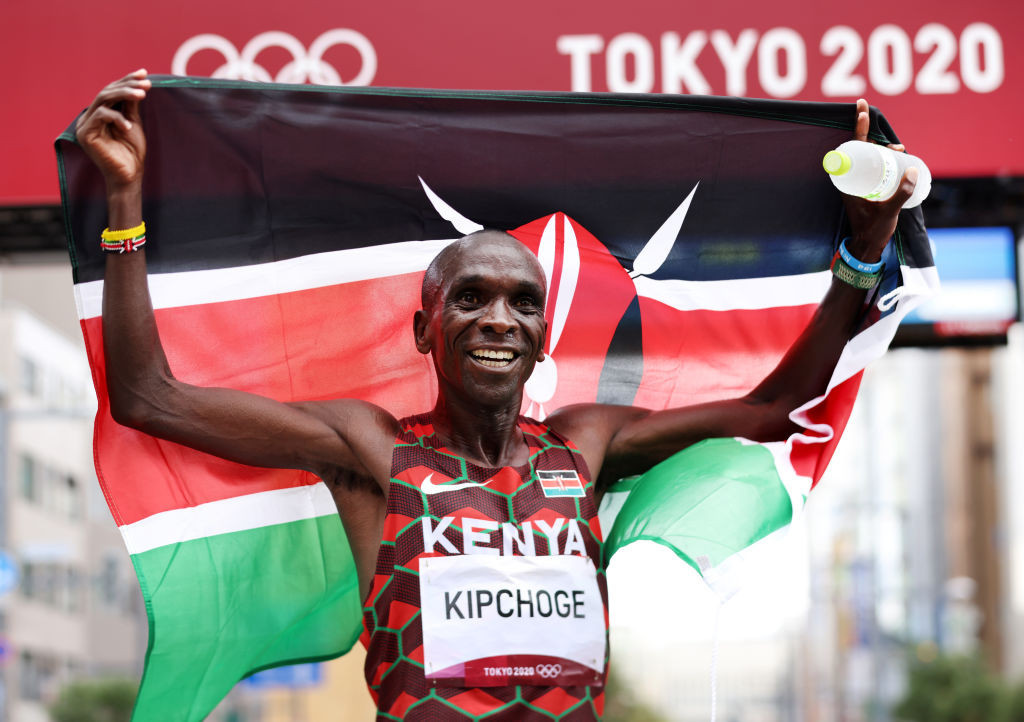 Kenya's Eliud Kipchoge today became the third man to make a successful defence of the Olympic marathon title after breaking clear of the field with 12 of the 42.195 kilometres remaining and winning in 2 hours  08min 38sec in a race held in Sapporo, supposedly to help runners escape the worst of the heat several hundred kilometres away in Tokyo.

Only two other athletes have retained the Olympic men’s marathon title: Ethiopia’s Abebe Bikila, the Rome 1960 and Tokyo 1964 champion, and East German Waldemar Cierpinski, who won at Montreal 1976 and Moscow 1980.

Kipchoge's margin of victory, 80 seconds, is the biggest in an Olympic marathon since Frank Shorter's win in at Munich 1972.

Silver went to fast-finishing Abdi Nageeye of The Netherlands, who spent much of his time on the run-in appearing to encourage his three companions in the chasing group to catch him up.

Kipchoge's Kenyan colleague Lawrence Cherono missed the podium by one place, finishing in 2:10:02, with Ayad Lamdassem of Spain fifth in 2:10:16 and fast-finishing home runner Suguru Osako coming home in sixth place in 2:10:41.

"Tokyo 2020 happened, I’m happy to have the title, but this is a huge accomplishment," the newly re-established men's marathon champion told NickHopeTV.

"It means we are on the right track to a normal life.

"COVID-19 will go, that’s the meaning of this Olympics."

After his decisive break in the 30th kilometre he swiftly opened up a 27-second lead through 35km, which he passed in 1:46:59, and he continued to pull clear all the way to the line.

It was a display of utter dominance from the dominant marathon runner of his generation.

Unlike Tokyo, Sapporo - which hosted the 1972 Winter Olympics - is not currently subject to COVID-19 emergency measures, which meant that thousands of spectators were able to line the streets to watch the racing.

But the decision taken in 2019 to move the road events to a city more than 800 kilometres north of the capital on the grounds that it would provide less savagely hot and humid conditions proved futile.

Unseasonably hot and humid temperatures have created gruelling conditions for the walkers and marathon runners.

Of the total of 106 runners taking part, 30 did not finish, including Uganda’s London 2012 champion Stephen Kiprotich, all three Ethiopian runners, including London 2020 winner Shura Kitata and Lelisa Desisa, winner of the world title in similar conditions in Doha two years ago, and Kenya’s Amos Kipruto.

Since he shifted away from a track career that saw him beat both Kenenisa Bekele of Ethiopia and Morocco’s Hicham El Guerrouj to the 2003 world 5,000 metres title, a year before winning Olympic bronze in that event, Kipchoge has established an almost unbreakable grip on the marathon event in recent years.

Kipchoge's defeat in last year’s London Marathon - whose winner, Ethiopia’s Shura Kitata, was one of the first to drop out in this race - was only the second of his career, and his first in four years.

He restored his equilibrium earlier this year by qualifying for Tokyo 2020 with victory in the Enschede Marathon in 2:04:30.

"The Olympic dream is a special dream," said Kipchoge.

"For every athlete here, it has taken a lifetime of preparation to get to this point.

"Today I lived my Olympic dream. I always say that sport is like life, whereby you can win and lose.

"But today was a day where I won and get to say I successfully defended my Olympic title."