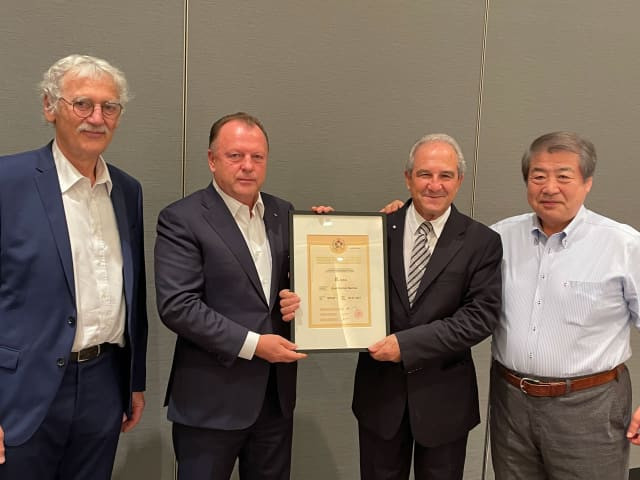 IJF President Marius Vizer formally awarded the eighth dan at a ceremony during the Tokyo 2020 Olympics.

Jean-Luc Rougé, the IJF secretary general, and Haruki Uemura, President of the Kōdōkan and IJF world promotions director, were present when Barcos was awarded with the title.

"It is a real privilege to receive my eighth dan from the hands of the IJF President himself, as well as from Jean-Luc Rougé and Haruki Uemura," said Barcos.

"To receive it here in Tokyo on the occasion of the Olympic Games is even more special.

"If you add that this is received after everything we went through over the past months, I couldn't be more happy."

Barcos is a former IJF head referee and not the only official honoured with the eighth dan at the Olympics.

Envic Galea, President of the Maltese Judo Federation and director of the IJF Academy, was also awarded the eighth dan.

"You have dedicated your life to our sport, within your national federation, then with the European Judo Union (EJU) and now the IJF, through the IJF Academy," Vizer said to Galea at another ceremont in Tokyo.

"I wish you all the best and to continue to serve our noble sport."

Galea is also a former EJU sport director and vice-president.

In judo, the eighth dan is the third-highest attainable rank.

Only 15 individuals have ever reached the rank of Kōdōkan 10th dan.

Barcos was the head referee director and an IJF Executive Committee member for 20 years.

Before that he was referee director at the EJU.