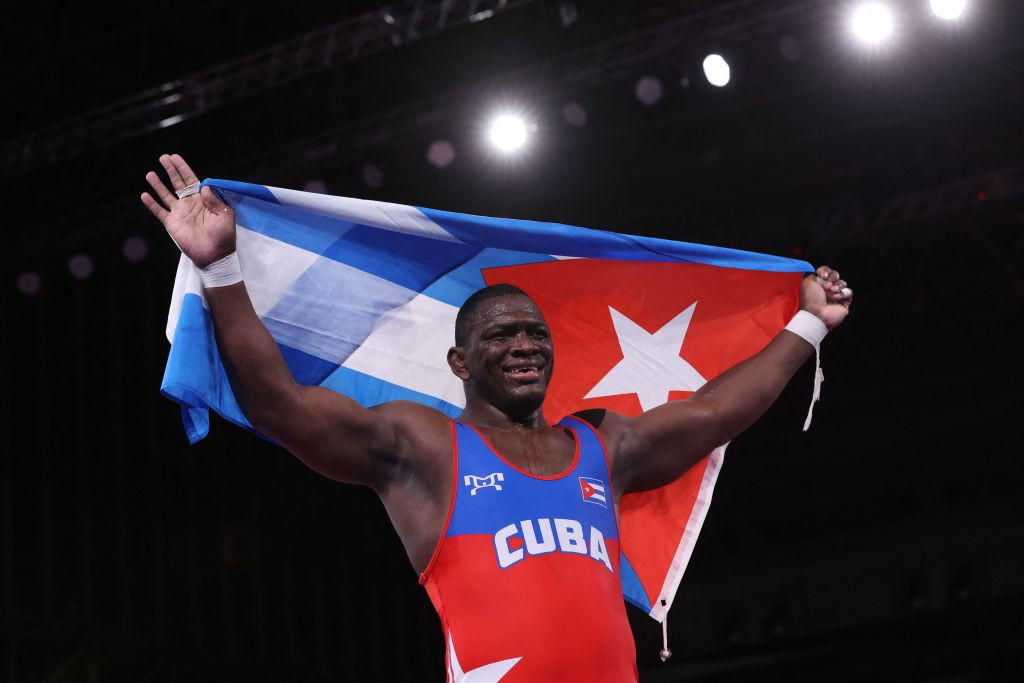 Aline Rotter-Focken of Germany survived a late onslaught from American Adeline Gray to top the podium in the women’s freestyle 67kg division at the end of a session played out in front of raucous support from the officials and other athletes allowed into the venue.

All eyes going into tonight were on López, the 38-year-old who was seeking to etch his name into the history books and join a select group of athletes to have claimed four Olympic titles.

The Cuban has dominated the Greco-Roman heavyweight division at the Olympics, winning every gold medal contested since Beijing 2008.

A fourth consecutive title never looked in doubt as he ruthlessly picked off Kajaia, the European Games champion and World Championships bronze medallist, on his way to a 5-0 victory in a one-sided final.

López, backed by a considerable Cuban contingent inside the arena, raced into a 3-0 lead and saw out the rest of the contest with consummate ease to match Icho, who clinched Olympic women’s freestyle gold in 2004, 2008, 2012 and 2016.

The bronze medals in the division went to four-times world champion Riza Kayaalp of Turkey, who beat Amin Mirzazadeh of Iran 7-2, and the ROC’s Sergei Semenov, who edged out Chile’s Yasmani Acosta Fernandez in perhaps the dullest bout of the night.

Sanchez stamped his authority on proceedings early on as he racked up an insurmountable 4-0 lead.

The upset delivered the 27-year-old Cuban’s first major international title - and first gold of these Games - and denied Fumita the chance of becoming the first Greco-Roman wrestler to win Olympic gold on home soil since South Korea's Kim Young-nam in the 74kg event at Seoul 1988.

Walihan was declared the victor by criteria in his match against Lenur Temirov of Ukraine, while Emelin thrashed Moldova’s Victor Ciobanu 12-1 in a repeat of the 2018 World Championships final, which Emelin also won comfortably.

Rotter-Focken also refused to follow the script, ousting Gray in unquestionably the contest of the evening.

The 30-year-old former world champion ensured Germany’s maiden Olympic medal in women’s wrestling was gold with a 7-3 victory over Gray.

Rotter-Focken looked to be cruising her way to the Olympic title when she established a 7-0 lead through a combination of clinical moves and the American’s failed takedown attempts.

Gray, seeking to add Olympic gold to her five World Championships crowns, rallied and gave the German a scare with three points late on.

But it was too little, too late for Gray and Rotter-Focken held on before collapsing to the mat in celebration.

Three more golds will be at stake when wrestling competition continues here tomorrow.