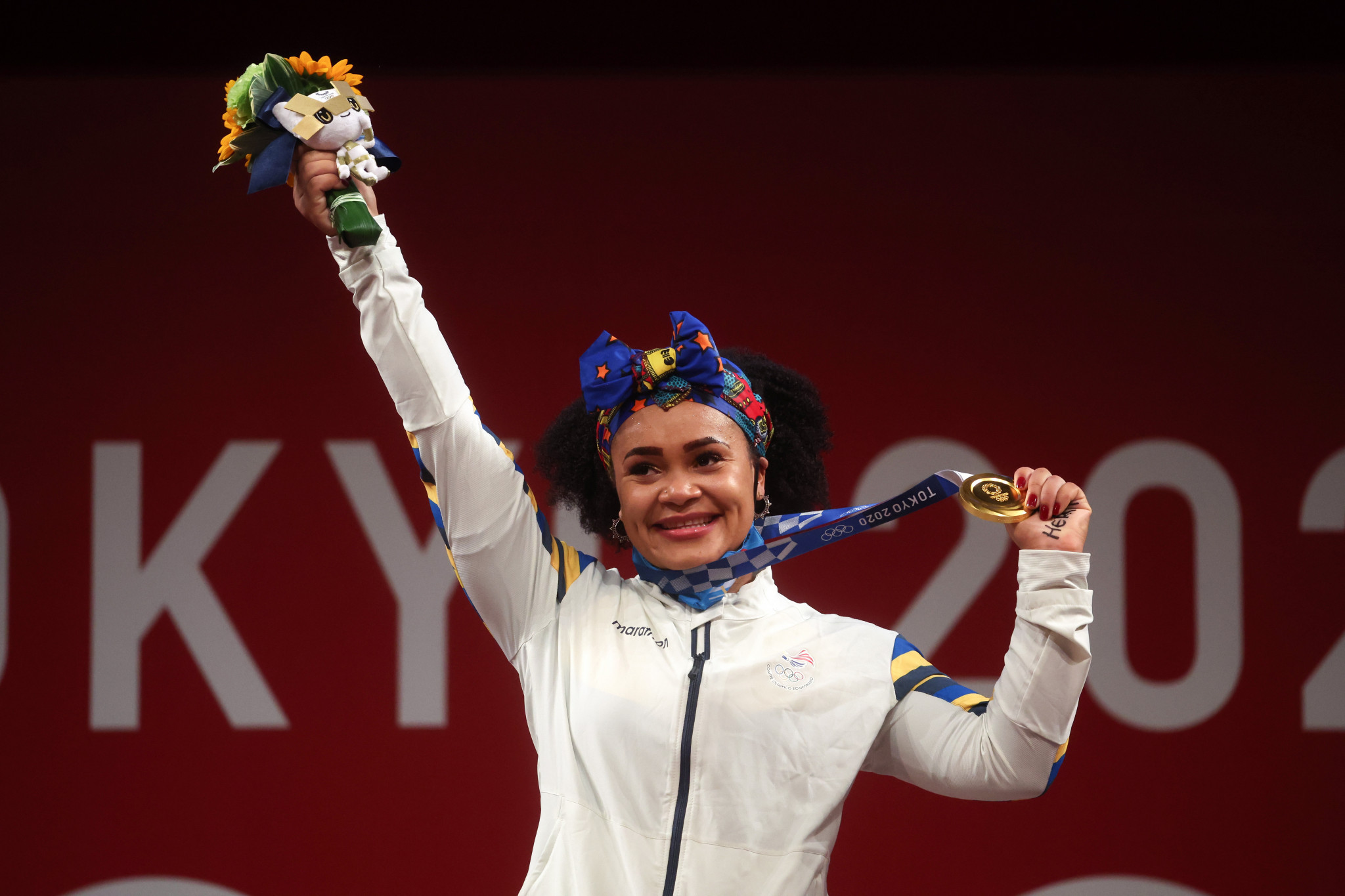 Neisi Dajomes became the first female athlete from Ecuador to win an Olympic medal in any sport today – and she did it in style with gold in the women’s weightlifting 76 kilograms class at the Tokyo International Forum.

Kate Nye, the young American who had never made an international team until 2018, also produced a career best result to take the silver medal.

Mexico’s Aremi Fuentes held on to third place to make it a clean sweep of the medals for Pan American lifters.

Fuentes could have been overtaken by Kim Su-hyeon but the Korean, who showed her emotions on the platform with two tearful outbursts, failed with all her clean and jerks.

It meant that for the first time at Tokyo 2020, after 10 of the 14 weight categories, there was no Asian athlete on the podium.

There was a dramatic finish when a tearful Dajomes screamed and slammed the floor in frustration when her final attempt was ruled a no-lift by the referees.

But a jury review reversed the majority decision, handing Dajomes an insurmountable six-from-six total of 263kg.

Nye took her last lift in an attempt to improve her total but had no chance of going up by 15kg to overtake 23-year-old Dajomes.

Dajomes was seventh at Rio 2016 as a teenager, in the old 69kg category, and is a multiple world junior and continental senior champion.

Her younger sister, Angie Palacios, was sixth last week in the 64kg class, in which she could have won a bronze medal had she made either of her final two clean and jerk attempts.

As she stood on the podium, Dajomes made an emotional dedication to her mother and brother, who passed away in 2019 and 2018 respectively.

"I had a hard time, I lost my mother and recently my brother Javier Palacios, for whom I am here," she told Ecuadorian television channel RTS.

"All my achievements are dedicated to his memory."

He said on social media, "There are no words! Thank you for this! Our first Ecuadorian woman with an Olympic medal. You are golden, Neisi!"

Nye, 22, said before the Games she intended to have an Olympic rings tattoo after competing, and now she can elaborate it with an image of a medal too.

Her one existing tattoo represents her light-and-shade struggle to cope with bipolar disorder, with which she was diagnosed in 2019 – the same year she was voted International Weightlifting Federation (IWF) female athlete of the year, having made astonishing progress to win a world junior title.

Nye suffered bouts of severe depression, had extreme mood swings and could not motivate herself.

She summed it up: "I loved weightlifting, but I couldn't bring myself to enjoy it."

Eventually, she sought help, and it changed her life.

"I know that without my diagnosis and support from my husband, family and doctors, I wouldn't have been able to compete," Nye said earlier this year when she gave a series of interviews in the United States.

"I want to use my platform as an athlete to continue to open up the dialogue when it comes to all mental health disorders."

Nye's profile will rise hugely after today’s effort, the best by a US weightlifter in 21 years.

Phil Andrews, chief executive of USA Weightlifting, said: "Congratulations to Kate, an amazing story of an athlete who came into a new system and has gone from watching from the outside to Olympic silver medalist in a quad.

"She’s a great athlete and an even better human.

"It is a shame the gold medal was in part decided by the jury and not by the two amazing athletes sharing the platform."

Nye herself said: "It feels surreal.

"I feel like I’ve had such a whirlwind of a quad, starting weightlifting in 2016, so the fact that I’m here in 2021 with a medal around my neck is unreal."

"I think this last year is the most challenging year of my career, so far.

"I made it to the top in 2019 in my true weight class, which is 71kg, and then after that it was kind of, let’s get into this Olympic weight class and figure things out.

"Between that, COVID, a coaching switch [to Spencer Arnold], lots of personal stuff with my mental health, it’s been a really hard year, but I think all of those trials and tribulations make me the person I am today, and I don’t think I’d be in this second-place spot without them."

Fuentes was not among the favourites for a medal at the outset but she made four of her six attempts to total 245kg, a far better effort than some of her rivals.

The European champion, Iryna Dekha of Ukraine, was seen as the strongest challenger to Dajomes beforehand, but she bombed out along with Kim, a silver medallist at the Asian Championships.

Darya Naumava failed with two of her clean and jerks and fell away – the second straight day of disappointment for Belarus after Yauheni Tsikantsou struggled in the men's 96kg yesterday.

Belarus could send only these two athletes to Tokyo because of its doping record.

Patricia Strenius of Sweden, oldest in the field at 31, failed with her final attempt but looked delighted with her total of 235kg, which earned her fourth place.

The best B Group lifter, Emily Godley of Great Britain, moved up to a highly respectable seventh place overall with 98-124-222.