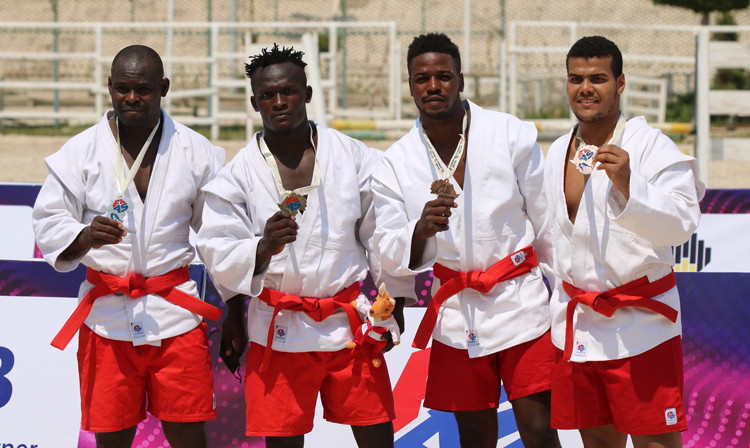 Morocco and Cameroon claimed all seven gold medals between them at the African Beach Sambo Championships in Cairo, concluding three days of continental competition in Egypt.

Having won nine titles at the African Sambo Championships over the previous two days, Morocco added another four on the sole day of beach sambo action.

The nation won two of these in the women's events, with Wissal Ziane winning the first in the under-59-kilogram category final, defeating Angola's Welvina Antonia Vemba.

In the heaviest women's category, the over-72kg, Khaoula Ziane added a second with a win over Ange Kamanda Ngalula of the Democratic Republic of the Congo.

A third Moroccan beach sambo title was claimed in the men's under-58kg, following the win of Yasser Bouhessoune over Ibrahim Zaghlol of Egypt.

The country's fourth and final title of the day came in the men's under-71kg when Mohamed Taibi defeated Roger Ndongo of Cameroon in the final.

Cameroon won the other three gold medals at the African Beach Sambo Championships, including the title in the women's under-72kg, thanks to Edwige Feugang Kuetche, who beat Noellie Kone of Mali in the final.

Franck Xavier Tadjukafontsop added a second gold for Cameroon in the men's under-88kg with a final win over Angolan Henrique Joao; and Ahmed Mohamed Husin of Egypt and Rubin Wina Itumba of the Democratic Republic of the Congo.

The final gold medal of the day was won by Maxwell Nana Djantou in the final of the men's over-88kg against Israel Phinees Mano of Burkina Faso.

Abdallah El Said of Egypt and Tonny Aroka Bahati of the Republic of the Congo were the bronze medallists.