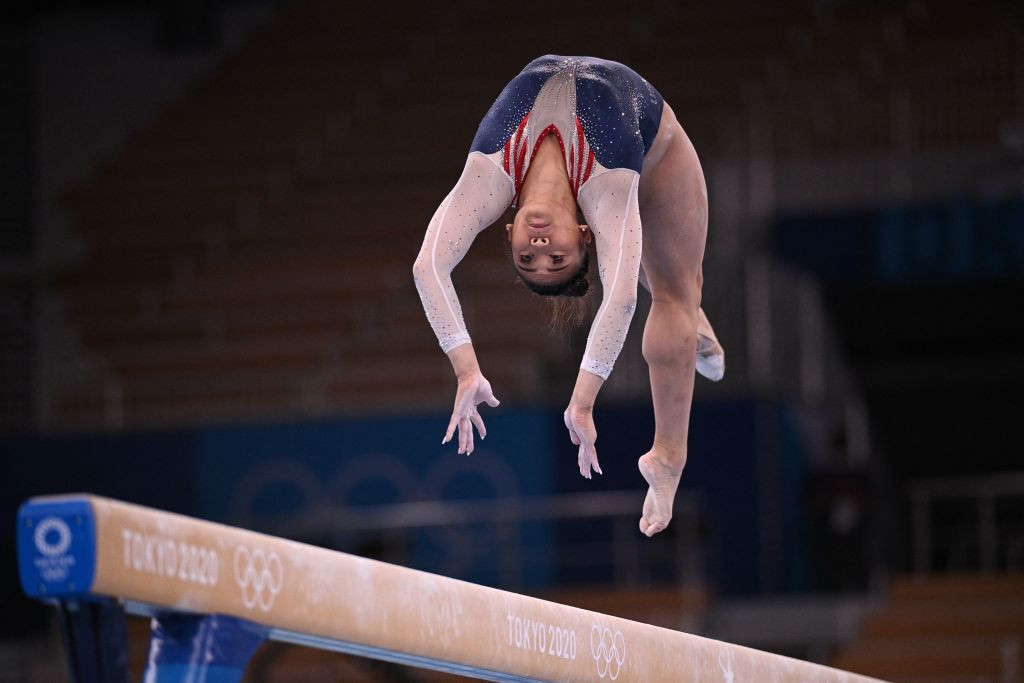 Sunisa Lee emulated absent team mate Simone Biles as she dazzled her way to the Olympic women's all-around title by edging out Rebeca Andrade of Brazil in a spectacular final at Tokyo 2020 here tonight.

In front of a watching Biles, the defending champion who withdrew from the final to focus on her mental health, Lee produced a nerveless floor routine in the last rotation to pile the pressure on Andrade.

Lee, a member of the United States squad which claimed a dominant team gold at the 2019 World Championships, ended the competition on 57.433 points.

Andrade, seeking to become the first South American woman to win a gymnastics gold medal at the Olympics, put in an energetic and effervescent performance on the floor but two step-outs proved costly.

Lee's triumph ensured perhaps the most coveted title in the sport remains in American hands and stretched the US' winning streak in the event at the Olympics and World Championships to 10 competitions.

It could also herald the start of the new era in women's gymnastics, which has for so long been dominated by Biles, who is six years Lee's senior.

Angelina Melnikova of the Russian Olympic Committee (ROC), who led the ROC to team glory earlier this week, took bronze on 57.199.

"It feels crazy, it is so surreal and it is a dream come true," said Lee, the the fifth successive US woman to win the Olympic all-around crown.

"The past two years with COVID-19 have been crazy.

"There was one point I wanted to quit.

"To be here and to be an Olympic gold medallist is just crazy."

The build-up to the final had been dominated by Biles' decision to withdraw, which came after she pulled out of the team final on Tuesday (July 27).

It gave gymnasts who would have typically been battling it out for silver in an event Biles has monopolised a golden opportunity, and it was one seized by Lee.

She opened with a steady vault performance before justifying her status as the favourite for uneven bars gold here next week with a fabulous routine which yielded a score of 15.300.

Lee had a serious wobble early on in her beam routine but recovered admirably to throw down the gauntlet to Andrade.

The Brazilian, whose career has been blighted by injuries, successfully enquired after her beam to reduce the gap even further going into the floor, where she had outscored Lee by more than 0.600 in qualification.

The target was well within reach for Andrade but she made two errors, dashing her hopes of the Olympic title and confirming the American as the Olympic champion.

Andrade is the first woman representing Brazil to claim an Olympic medal in artistic gymnastics, yet she may feel it should have been a different colour.

"I hoped for this moment and I have trained and worked super hard for this," she said.

"I don't have any words to describe how I am feeling, nor the feeling of having the Olympic silver medal around my neck."