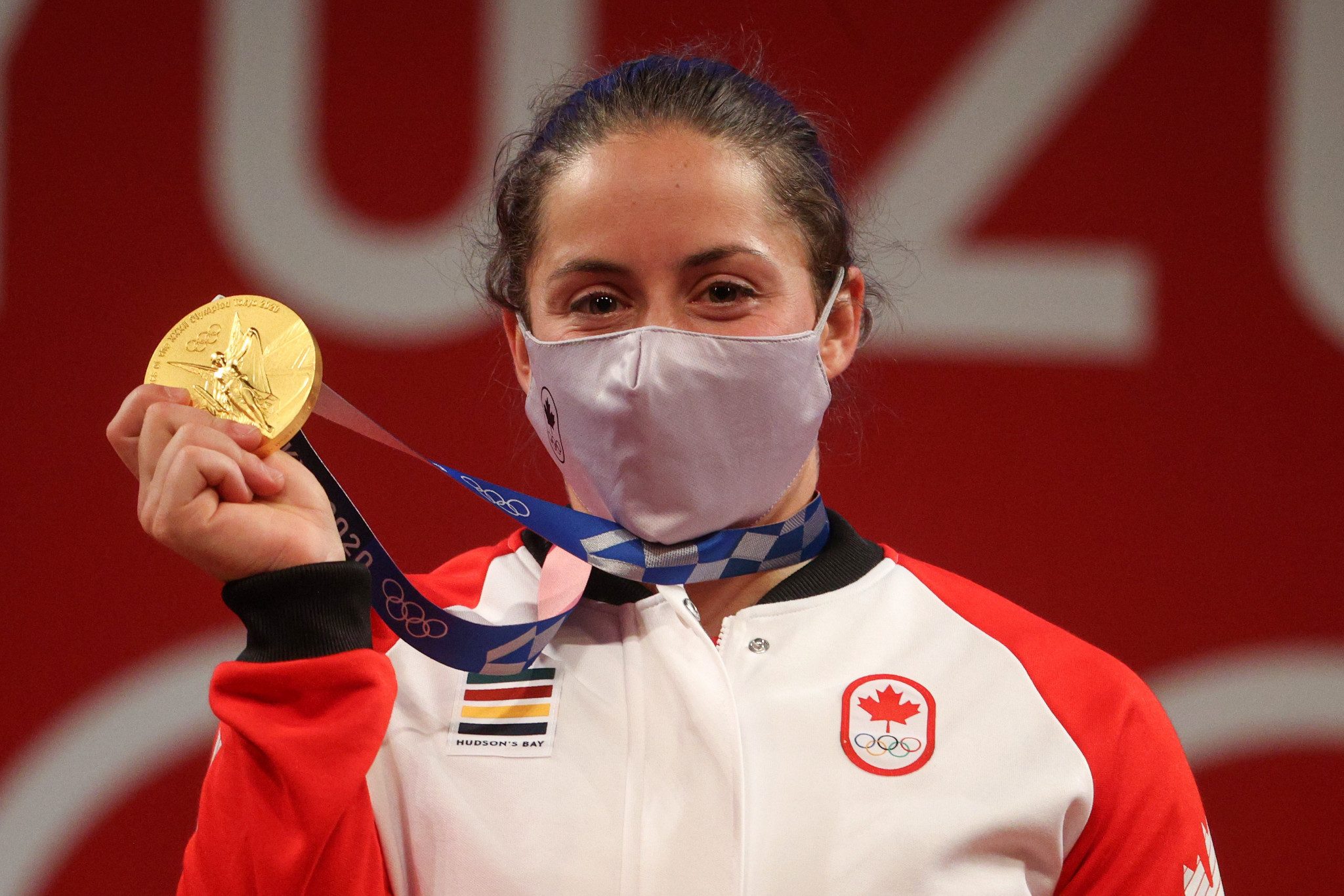 Maude Charron went into weightlifting "just for fun", finds training a bit boring, and had never made an international appearance at the time of the last Olympic Games in 2016.

She did not even watch it on television in her youth, preferring the acrobatic elements of gymnastics and diving.

"The first time I ever saw weightlifting on television was at Rio 2016," she said.

"In some ways I didn’t choose to do weightlifting, but weightlifting chose me - and when it did I really went for it."

Now Charron is a gold medallist on the sport's biggest stage - the first Canadian woman ever to stand on top of the podium at an Olympic Games.

Her victory in the 64-kilogram category at the Tokyo International Forum last night will make a huge difference in Canada because weightlifting should now gain a high level of funding, having got this far with virtually none.

"It could transform our sport," said Craig Walker, President of the Canadian Weightlifting Federation.

Walker, one of the leading supporters of reform within weightlifting, which is in danger of losing its Olympic status because of a series of doping and corruption scandals, said, "Maude has shown that you can be the very best in the world, clean - isn’t that what it’s all about?"

To call Charron multi-talented is something of an understatement.

She plays the oboe, trained with the world-famous Cirque du Soleil, was an accomplished gymnast and Crossfitter, is a high achiever academically, and has beaten record after record since sacrificing all her other plans to focus on weightlifting.

By now she should be a year into a new career with the police.

"I had everything planned," she told insidethegames in an interview during the qualifying programme.

"University was finished, I was ready to go to police school straight after the Olympic Games, every test was planned - but it was all postponed because of COVID.

She described Tokyo as "my first time and maybe my only chance" - but maybe she will rethink her plans now.

Charron is already "so excited" about competing at the Birmingham 2022 Commonwealth Games, not least because she wants to spend some tourism time in England.

She is used to driving six hours from her home in Rimouski to training camp in Montreal, where coach Jean-Patrick Millette is based, and is well aware that six hours in England would take you from one end of the country to the other.

"I had to postpone everything because of the pandemic, I had to make so many sacrifices," she said.

"I want to buy a house, my first house, with my boyfriend but we have to postpone that too, as I will have only my athlete funding."

Charron, 28, is not from a sporting family but she was active from her very early years.

"I started gymnastics when I was four, started competing at seven or eight and stayed in it until I was 17."

After that she trained with the Cirque du Soleil, from Montreal, performing acrobatic circus tricks.

"I stopped circus because I was too injured.

"I'd love to be a circus artist in Cirque du Soleil, that was another dream for me.

"As a little girl I wanted to go to the Olympic Games as a gymnast.

"I know artists in the Cirque du Soleil, many of my fellow students are now there - I’m very excited for them.

"It's a sacrifice for them too.

"I didn't really enjoy weightlifting more when I started seriously - in gymnastics, circus, Crossfit there’s a variety of movement, but weightlifting is basically two movements and it's a boring sport for training.

"But my coach [then Serge Chretien] suggested to me very strongly that I could go a long way in weightlifting.

"I put my ego away and went for the sport that chose me."

After she won a national title in late 2016 Charron had her medal presented to her by Christine Girard, who was an Olympic champion at London 2012 - but not until 2016, when other lifters were disqualified for doping.

"I thought, 'Oh my god, it’s Christine Girard, where did she come from?’

"It was a very nice surprise," said Charron.

Besides her coach Millette, Charron has had valuable support from another very important close friend - her dog Murph.

"He’s my best friend, he helps me get through those emotional things you have as an athlete.

"I choose to train in my home town because it helps me mentally I can go outside, I have family, friends, and Murph."

At the start of Olympic qualifying Charron "entered but without really thinking I had any chance".

That changed as time passed, as key rivals dropped out because of injury or doping suspensions, and as she racked up ever better performances, winning Commonwealth Games and Pan American titles along the way.

Since the start of qualifying in late 2018 Charron has improved her best total by 12kg, has avoided serious injury and has worked ever harder.

"Everything went really well," she said.

You can say that again.