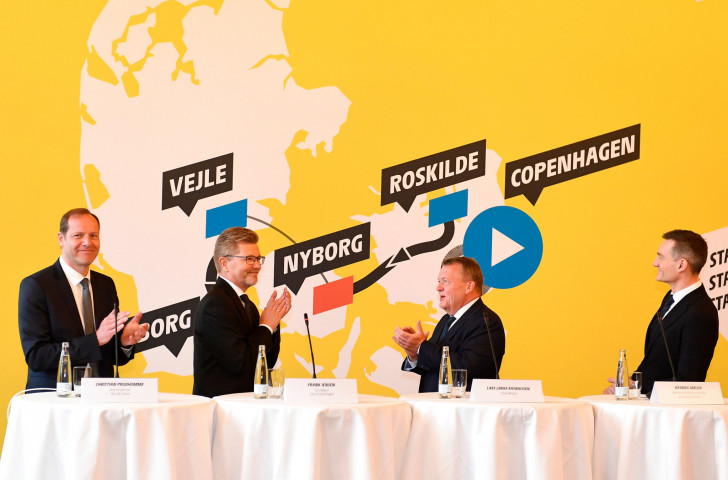 The Danish cities due to launch next year's Tour de France have received the Grand Départ Trophy.

Lars Weiss, chairman of Grand Départ Copenhagen Denmark, was given the trophy during the victory ceremony for the 108th Tour de France on Sunday (July 18) by race director Christian Prudhomme and the Brittany region.

Brittany stepped in to open this year's race when Denmark withdrew because of COVID-19 complications.

The first three stages of the 2022 edition of the Tour de France are now due to take place in Denmark instead.

The first stage is a 13-kilometre individual time trial in capital Copenhagen.

For the second, riders will venture out of the city on a 199km journey through picturesque landscapes from Roskilde to Nyborg.

The final route in Denmark is a 182km stage from Vejle to Sønderborg, which starts in hilly terrain before the route takes the riders to southern Denmark.

"Next time the world's largest cycling race starts - it will be in Denmark," an excited Weiss said.

"It is so amazing!

"From now on the many millions of tour fans, will look to Denmark for the next Tour start.

"I cannot wait to show our cycling country in 2022 – it will be a celebration for all of Denmark and for cycling fans all over the world," Weiss said.

Nine out of 10 people in Denmark own a bicycle and Danes cycle an average of 1.6km per day.

Starting in August, the Grand Départ Trophy will travel around Denmark on a yellow cargo bike.

The trophy will visit the five cities due to start or end stages as part of a Tour de France exhibition.

It will begin in Sønderborg on August 17 and will end in Copenhagen in March 2022.

The Tour de France course changes every year and from the 1970s it has been common to award the Grand Départ - the beginning of the race - to venues outside of France.

This is a way of increasing international interest in the competition and cycling.