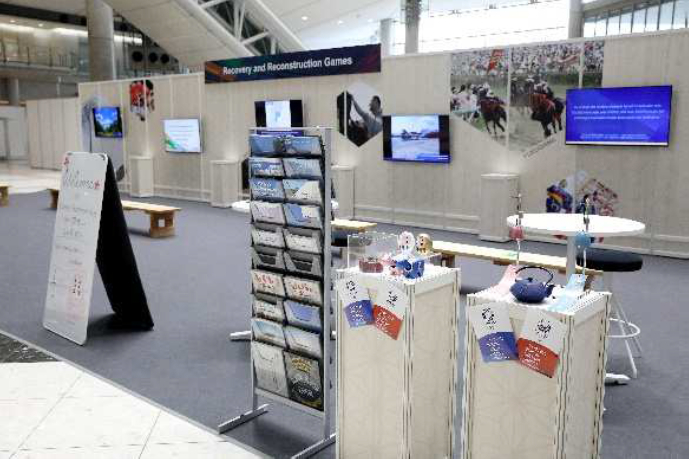 Leading Japanese Reconstruction Agency official Yasuyuki Kobayashi has insisted that the Tokyo 2020 Olympics and Paralympics will still play a part in helping Japan recover from the impact of the devastating tsunami, earthquake and nuclear meltdown at Fukushima in March 2011.

"We think that the idea of 'Reconstruction' Olympics and Paralympics are a very important message to send at this time," Kobayashi said as Tokyo 2020 launched a special Recovery and Reconstruction Games booth at the Main Press Centre to offer more information.

"During the Games we are using products from the affected areas.

"The eaves of the gates at the entrance to the stadium have been constructed with wood from the prefectures.

"In the Athletes' Village, we are providing cuisine from the affected areas and even the victory bouquets use flowers from the areas."

Kobayashi said that of 470,000 people evacuated from impacted areas at the height of the disaster, only 40,000 had been unable to return.

Tokyo 2020 invited community leaders from the worst-hit areas to tell their stories online at the booth.

Akiko Iwasaki from Houraikan in Iwate said that sport had played a major role in the regeneration of the area culminating in a successful campaign to bring the 2019 Rugby World Cup to the Kamaishi Recovery Memorial Stadium in the prefecture.

"Kamaishi is a rugby town and therefore we wanted to hold the World Cup of rugby and create hope through sport, the dream came true in 2019," Iwasaki said.

Uruguay beat Fiji in the group match played at the stadium.

The community also hosted the National Triathlon Championships in 2016 after working together to clean the beach.

British teacher Richard Halberstadt has lived in Ishinomaki, the Miyagi city closest to the epicentre of the earthquake, for 30 years.

Halberstadt is now director of the community and information centre there.

"It has a lot of sad data in connection with the earthquake," Halberstadt said, as "4000 people lost their lives here in Ishinomaki, the most in any single city in the disaster."

At its height, tsunami waters reached 21 metres in areas of the city.

In March it opened a memorial park which locals hope will absorb water in any future tidal wave.

The prefecture of Miyagi hosts football at the Games, beginning with the women's Group F match between China and Brazil on Wednesday (July 21).

Yoshiko Aoki, representing Tomioka in Fukushima, spoke of her pride that graduates of the local high school are set to take part at Tokyo 2020 in football and badminton.

"We had young people who did not give up, believed in tomorrow and also believed in their dream and realised it," Aoki said.

"We can see courage and hope in those young people and are able to believe in the future."