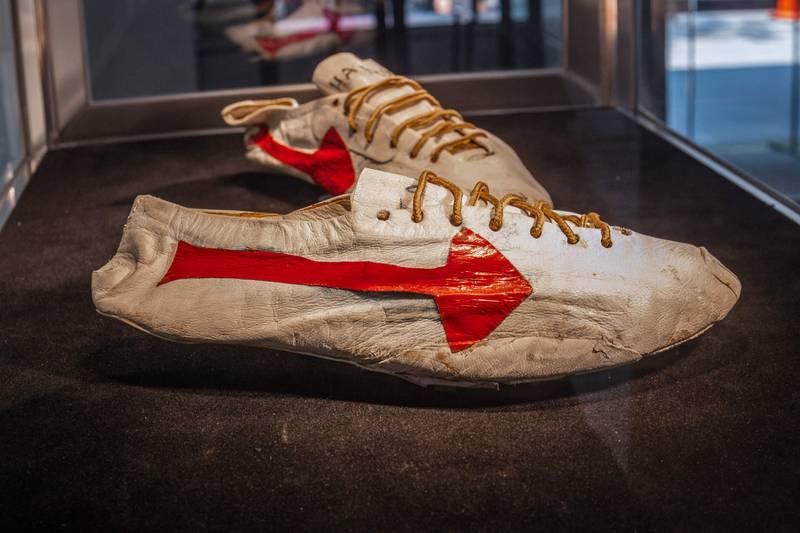 A pair of early spikes handmade by Nike co-founder Bill Bowerman for Canadian sprinter Harry Jerome, including featuring a prototype logo, have been up for sale by Sotheby’s and could fetch up to record $1 million (£723,000/€850,000) when they are auctioned later this month.

The shoes made for Jerome, winner of an Olympic bronze medallist in the 100 metres at Tokyo 1964, features a red arrow that was a prelude to the famous Nike Swoosh logo.

Sotheby's New York will put the white lace-up shoes on sale online from July 23, the day of the Opening Ceremony of this year’s Olympic Games in Tokyo, to August 2.

As well as winning an Olympic bronze medal, Jerome set a total of seven world records during his career and claimed the gold medal in the 100 yards at the 1966 Commonwealth Games in Kingston in Jamaica.

"This rare pair of track spikes made in the 1960s and modified in the early 70s represents an important chapter in the origins of the Nike brand," said Sotheby’s in a statement.

"The present pair features the use of four prototype logos, which show Bill [Bowerman] experimenting with the concept of a brand and happen to bear a remarkable resemblance to the Nike Swoosh."

They also feature waffle soles which became the first notable innovation introduced by the company when it premiered the Nike Moon Shoe at the 1972 Olympic Games.

The name "Harry" is also legible on the tongue of one of the shoes.

"The reason for this is that Bill was constantly tinkering and modifying his shoes, and Bowerman modified the shoes with the current soles, after which point, they were never worn again.

"The track shoes are in excellent overall condition.

"There is slight peeling to tape in certain areas."

The sole design came in a lightbulb moment of inspiration for Bowerman at a breakfast table in Fossil in Oregon.

In 1964, then University of Oregon track-and-field coach Bowerman and one of his former athletes, Phil Knight, founded Blue Ribbon Sports.

Bowerman wanted to develop a shoe that could provide traction in bad weather without spikes.

One Sunday morning in 1971, he and his wife were having waffles at breakfast when the solution finally came to him - and the waffle sole was born.

In 1978, Blue Ribbon Sports changed its name to Nike, Inc. Soon after, the company launched a clothing line and signed Michael Jordan to an endorsement deal at the start of his fledging National Basketball Association career with the Chicago Bulls.

Currently, the most paid at auction for a pair of running spikes is for ones worn by Britain’s Sir Roger Bannister when he ran the first sub-four-minute mile in history in 1954.

Sotheby’s is also selling a pair of Converse Fastbreak sneakers that Jordan during trials for the United States basketball team to play at the 1984 Olympic Games in Los Angeles, where they won the gold medal.